Disclaimer: This post has been sponsored by Country Magic, the makers ofÂ bloo juice.
All opinions are my own.Â
Â 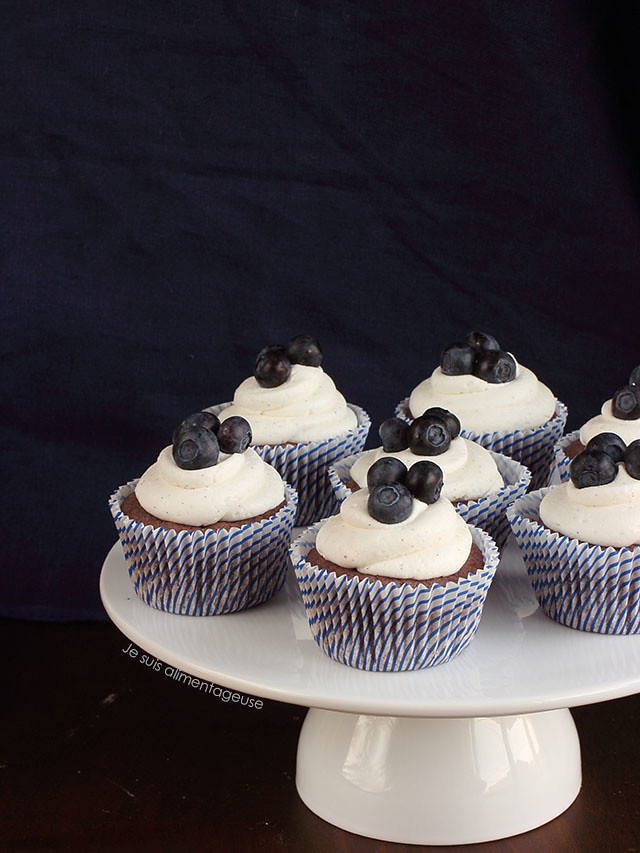 So I’ve been on a huge blueberry kick lately. I’ve been buying up blueberries from my local market every week, and the bag of frozen blueberries in my freezer has been almost completely depleted from my frenzy of blueberry smoothies. GIVE ME ALL THE BLUEBERRIES. So naturally I was going to turn my obsession into cupcakes, right? People typically turn blueberries into pie or muffins, but these are blueberry cupcakes with vanilla bean icing and fresh blueberries. Because I can.

Remember about five years ago when people were all about blueberries? Everyone wasÂ obsessed with antioxidants. I’m pretty sure the blueberry phenomenon was the first “superfood” as dubbed by the media. Now things like broccoli, kale, avocado, and brussel sprouts have joined the group of super foods, but blueberries still have a special place in my heart.

I normally only drink water, but for a special treat, I sometimes like to juice an orange or make some lemonade because I find most store-bought juices are overly sweetened and have lost all of their nutritional value from being concentrated, shipped to a packaging factory, then rehydrated and packaged. I can’t really just juice a blueberry (well I don’t have a juicer, so maybe you could), but unlike other pasteurized juices, bloo is only flash-pasteurized so that it keeps as many nutrients as it can in bottle form.Â It’s not from concentrate, there’s no added sugar, so it’s literally just blueberries. Apparently 600 per bottle. O_o. 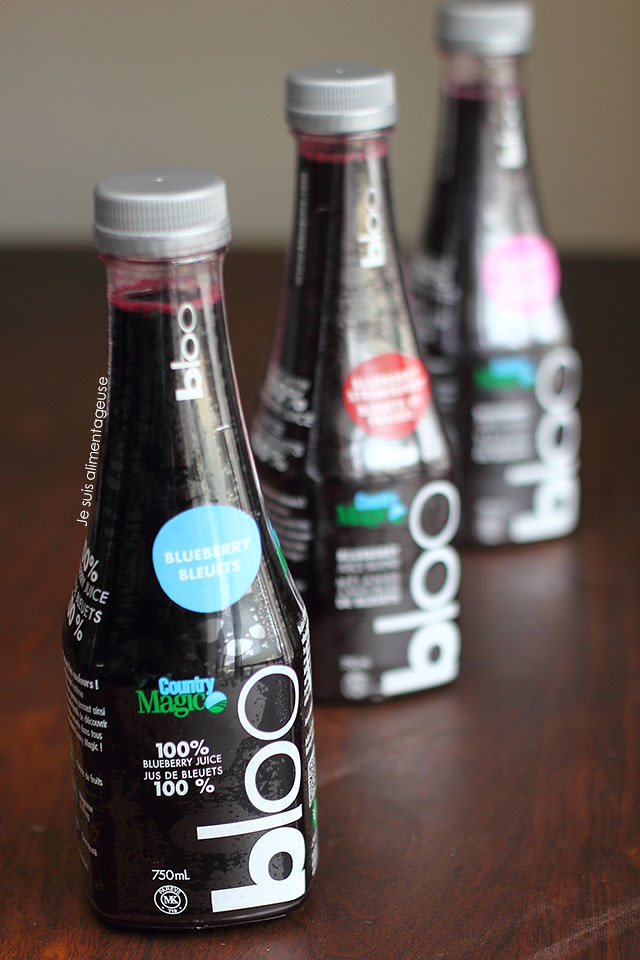 I tried all three flavours: Blueberry, Blueberry Strawberry, and Blueberry Citrus. If you saw my Instagram, you might have seen my taste-testing process where I took three “shots” of bloo.Â All three are delicious as a straight up juice, but if you were to get a little creative with it, the Blueberry juice would be great with more savoury applications, like a savoury reduction for different proteins like tofu or seitan (or if you eat meat, I imagine the flavour would pair well with beef or pork). It’s a very soft sweetness and you can really taste the blueberries.

The Blueberry Strawberry was really good too, it was sweeter and a bit tangier than theÂ Blueberry, but definitely really good. I would love to turn it into a sauce with extra strawberries and blueberries to go over whipped coconut cream and waffles. Heck you could replace the milk in the waffles withÂ bloo and I’m sure that would taste awesome.

My favourite has to be the Blueberry Citrus. Let’s be real, my logo has lemons for a reason. It’s so bright and happy. The lemony citrus really complements the subtle sweetness of blueberries, it’s unreal. This was theÂ bloo that I used in my recipe because the lemon really brought out the blueberry flavour. 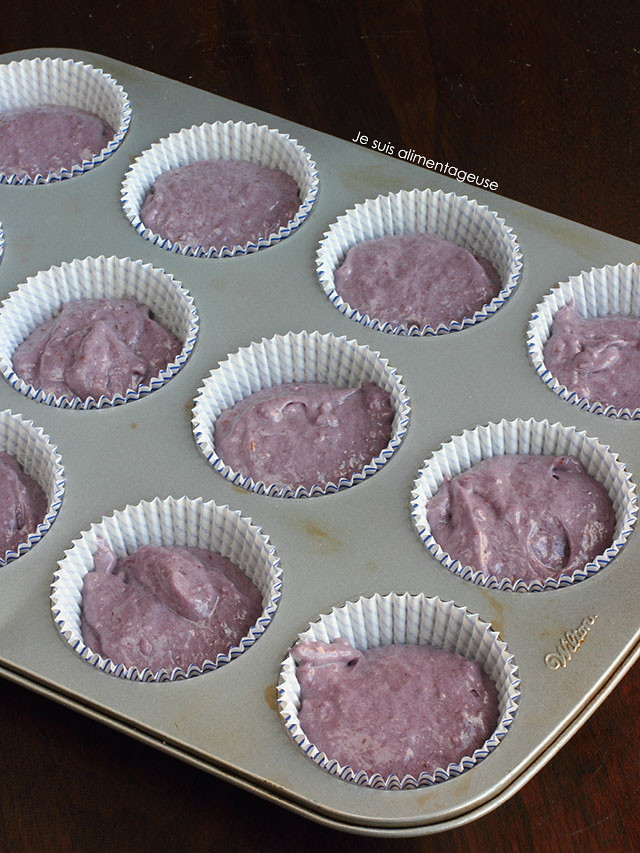 When I was developing the recipe for this, I was a little scared of what colour the cupcakes would bake into. Grey? Blue? Purple? As you can tell from the see-through packaging, blueberries yield a juice that is actually a very deep purple, despite their namesake. Makes sense, because I always have purple-stained fingers whenever I go blueberry picking.

I did someÂ researchÂ and it turns out that blueberries are quite acidic, and when they’re juiced, they have a reddish tinge to them, turning their blue colours into a purple (yay secondary colours!). However, if you add baking soda to the batter, they’ll turn “true” blue. Although the cupcakes might not rise as well as a result because baking soda only has a single action rise (meaning it starts reacting on contact with acidic parts of the batter), whereas baking powder has a double action rise (meaning it reacts both on contact with acidic parts of the batter as well as when it’s heated).

If you want it to be more blue, try adding about 1/2 tsp baking soda to the batter, but I liked the deep purple of the batter so I left it out. When the blueberry cupcakes baked up, the purple faded a little bit but kept a purplish hue. Because of the lighting of the photo, the colour looks deeper than they were in reality, but it tastes really good, I promise! 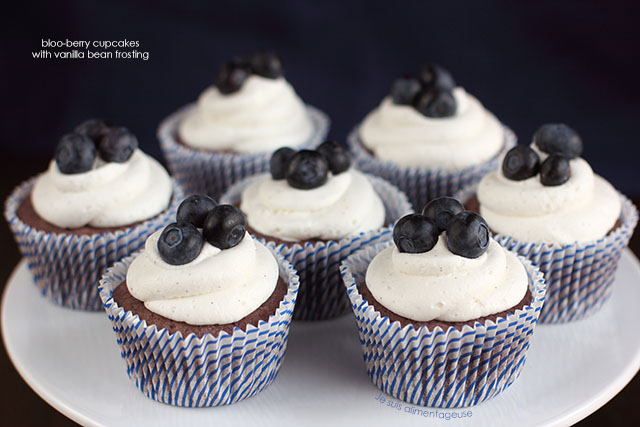 Before I share the recipe, I thought it was interesting to mention that Country Magic is from Nova Scotia, Canada, soÂ blooÂ is a Canadian product. Since the Olympics just wrapped up this Sunday, I’m feeling particularly proud of Canada’s athletes. #WeAreWinter and all that. (I know I hate myself for using hashtags unnecessarily in a post, but 10 GOLDS!!)

Anyway, I hope you like this recipe, and you try outÂ bloo for yourself =)

For the cupcakes
For the frosting
Garnish: 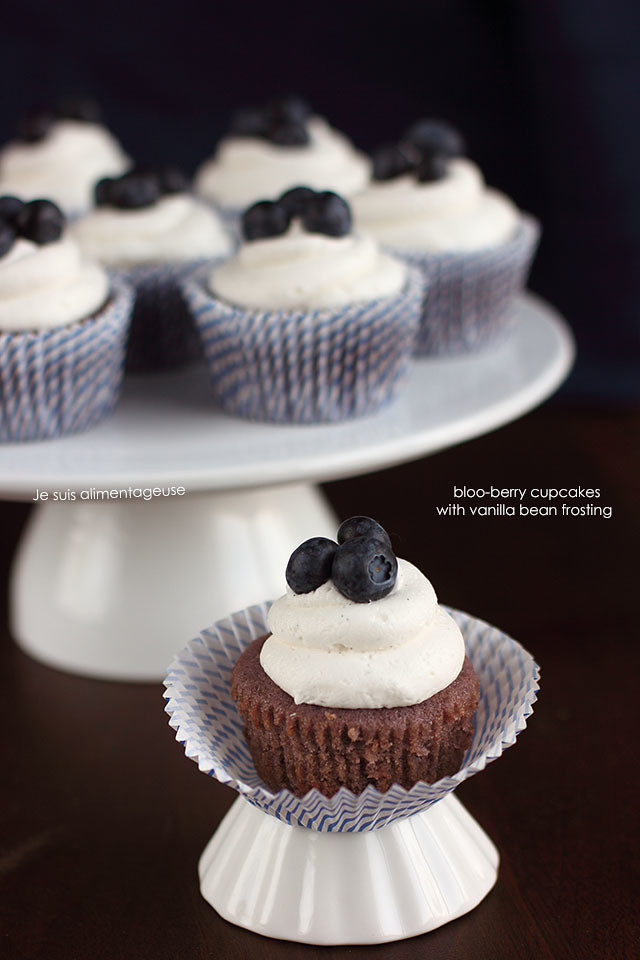 Disclaimer: This post has been sponsored by Country Magic, the makers of bloo juice.
All opinions are my own.Â