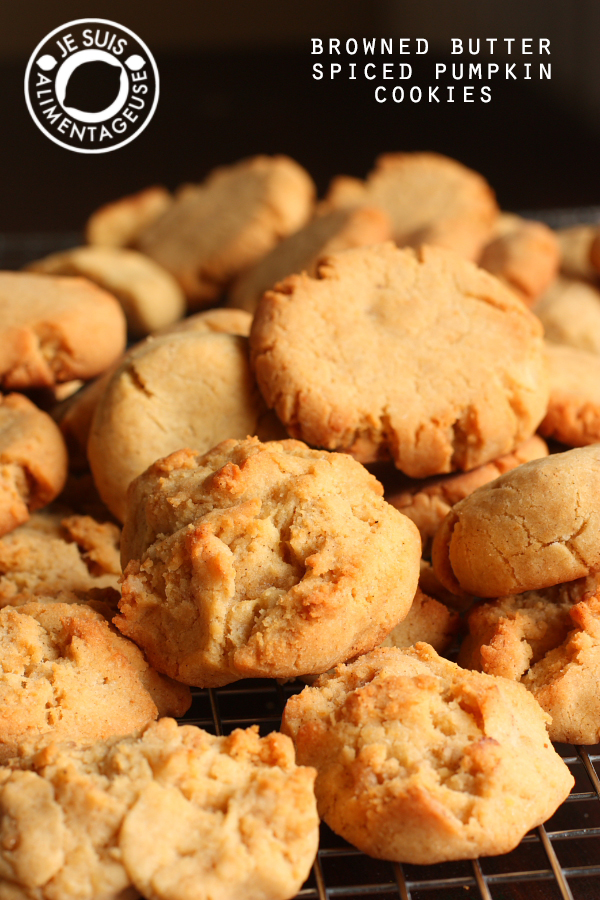 I promise you my pumpkin obsession is almost over. I have about 2 cups of pumpkin purÃ©e left in my fridge and I’m probably going to use it up by my next post. Â But today, my friends, is a day of experimentation. Very scientific, I’m sure, despite it being about 6 years since I did any science courses. These browned butter spiced pumpkin cookies are vegan because I experimented with browning some Earth Balance instead of dairy butter. The results were fairly interesting.

First off, some of you may be asking, what the heck is browned butter?

Browned butter (also known as beurre noisette)Â is when you cook butter over a slow and steady heat until it browns and has this beautiful nutty aroma. Its flavour seeps through cakes, cookies, frostings, any dish, and adds complexity with it’s unique flavour. With my transitioning to vegan, I’m having a hard time parting with butter (one time I got fairly drunk with a friend and insisted on making scones because I wanted a vessel on which to consume butter) and I wanted to see if there was a vegan substitute for the overwhelmingly beautiful flavour of browned butter.

So I took a cup of Earth Balance (vegan “buttery” spread) and used the same technique.

The results ended up very similar, the butter melted, it foamed, the foam subsided and after about 20 minutes, the liquid browned to a lovely caramel.

But in the end it kinda just smelled like hot oil. Predictably it didn’t brown the same way that butter does, but I thought you guys would be interested in my experiment nonetheless. The cookies didn’t necessarily have any brown butter flavour either, but they cooked just fine. I would probably skip the browning and just use straight-up buttery Earth Balance to make these cookies extra soft instead of melting it like this time.

But I also experimented with the way that I baked cookies.

Normally I love those round, puffy cookies, like my favourite recipe for chocolate chip cookies. I veganized the recipe by using pumpkin purÃ©e as a replacement for the eggs, and Earth Balance for the butter. Easy peasy. I also removed the baking soda because pumpkin purÃ©e is fairly basic (on the pH scale I mean) already so I didn’t think the batter needed it.

I started off by baking my “control” cookies, the tried and true round balls. My favourite. 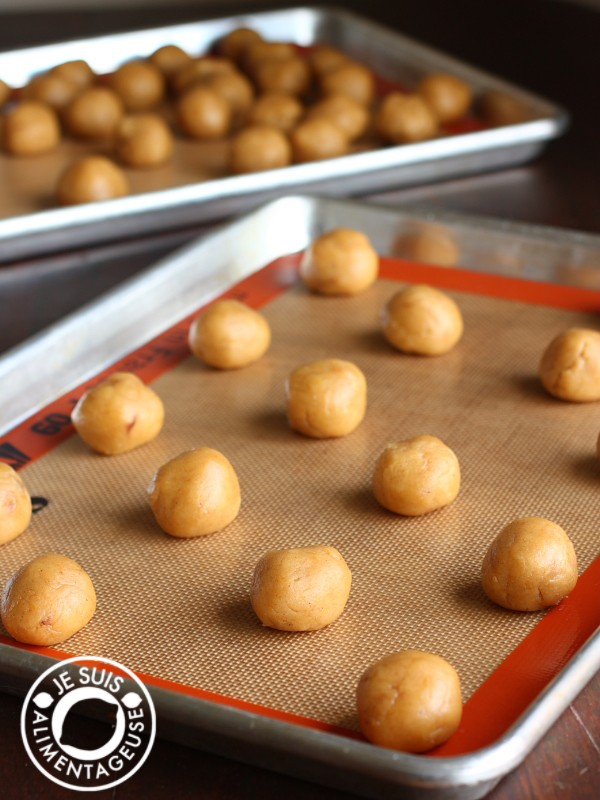 And then I experimented. Some of my blog friends break round cookie balls in half, then press them together with the broken/jagged sides of the cookie dough facing up. When they bake, they get this lovely rustic top and they get beautifully browned. The other method was just smushing the ball so it would bake out and look more like a cookie rather than a puffy little ball.

The results were pretty interesting.

The broken/jagged side-up cookies were next, and they were crispy on the outside but not in a bad way, like in a really good way. The insides were chewy too and extra texture from the tops made them pretty awesome.

The smushed ball cookies were a little over-baked, I should have taken that into account when I smushed them, but they were crispy. Kind of like biscotti, but still really good. Much better accompanied by almond milk (or whatever milk you like to drink).

I think my favourites were still the classic rounded balls that were baked because the inside was just super chewy, but when I brought this to the community cooking class where I volunteer, everyone loved the cookies no matter what kind of form they were. Some of them even decided that the spice in the cookies went well with the stew we were eating, so they broke up the cookies as a sort of sweet and spiced crouton. 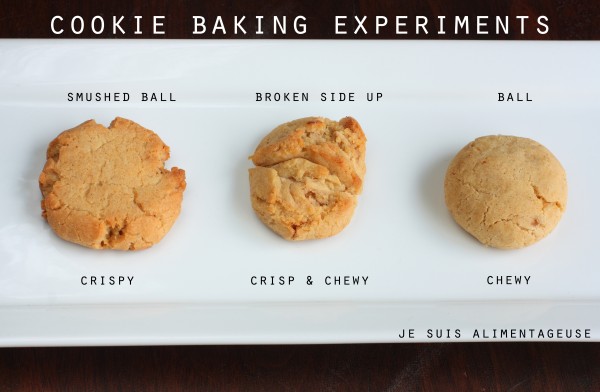 The only thing is that the broken side up cookies are beautiful to photograph. The texture adds depth to the photo and with my new shiny 50 mm f/1.4 lens, it looks gorrrrgeous.

So when you bake these, I suggest you underbake them, by a lot.

I originally baked them for about 15 minutes, but even for 11 minutes would be good. Even if you think they’re not done, just pull em out, let em set for a minute on the pan and then remove to let cool. Spiced, pumpkiny, and chewy with a lightly crisp outside. Mmmm.

Have you tried anything with browned butter before?