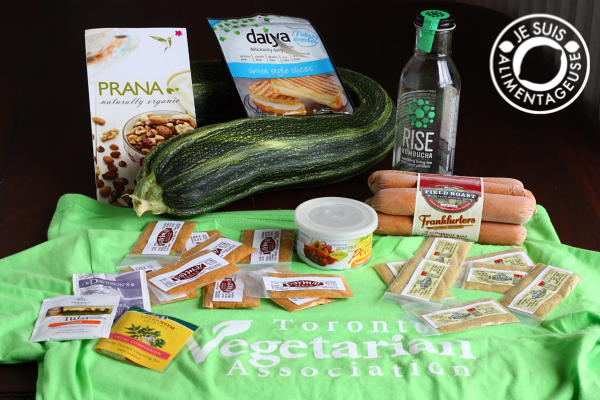 Disclaimer: There are tons of external links in this but this is not a sponsored post at all, I’m just really really excited to tell you about all the awesome things that happened at the Toronto Vegetarian Association’s 29th Annual Vegetarian Food Festival this year!

This weekend was Toronto Vegetarian Association’s 29th Annual Vegetarian Food Festival and it was SO MUCH FUN! Last year I moved to Toronto, and within the first couple days, I found out about the food festival and as a budding vegetarian, I ventured by myself down to the harbourfront to check it out. This year, I was a volunteer at the bookstore and for the cooking demos, and I’m so glad that I was there for all three days. I learned so many things, met so many awesome people, watched some excellent cooking demos, and got lotsa goodies! Only some of which are depicted above because they fell into my mouth before I had a chance to take a photo.

This year at the food fest, everything was totally vegan. No milk or other dairy, no eggs, and so much vegan deliciousness. There were some booths that used milk or cheese but those were addressed pretty quickly (did I mention I was also helping out at Exhibitor services?). We had a couple complaints about booths using honey in their products but as you guys may have seen on this blog before, honey is a weird grey area for vegans because yes, it’s an animal by-product, but bees aren’t harmed in the process of making honey. I had a commenter say that bees don’t even produce honey unless they are in a safe environment, but I don’t really know enough about large scale apiaries to understand how those companies treat bees compared to smaller, local apiaries (which IMO make better honey anyway).

I loved learning about kombucha and trying both RISE Kombucha and TONICA Kombucha, both excellent Canadian companies with excellent products. I think I liked RISE a bit better because the TONICA Kombucha had a bit more alcoholic flavour to it, which I wasn’t really into. I tried Rose Schizrandra, Hibiscus Rose Hips, and Mint Chlorophyll from RISE, and I had Vibrant Blueberry from TONICA Kombucha (and I’ve had their Peach Resolution, which is super delicious). For those who are wondering why kombucha is such a new hyped up drink, don’t worry, I’m pretty in the dark too. But from what I learned this weekend and from my own readings, kombucha is great because it’s made from a yeast/bacteria culture, which is probiotic, great for your stomach, and is a great alternative to other fizzy drinks because these companies use natural sugar and with the fermentation, there is naturally less sugar in the drink. Probiotics lead to a happy belly =) 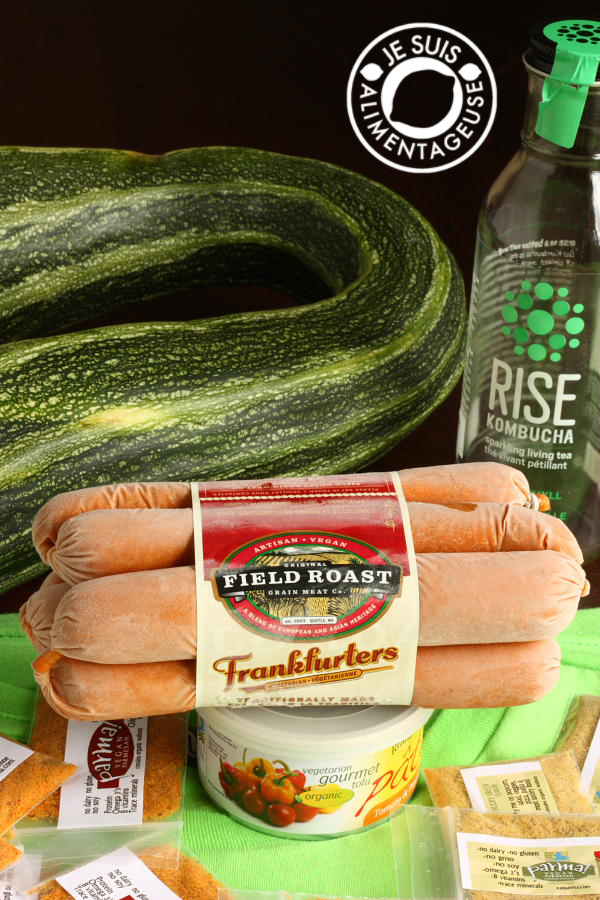 Some other things that I sampled were LÃ¤rabars, which I’m sure everyone knows about because they make an amazing and delicious product that is such a great, vegan and gluten-free energy bar. Chris is pretty skeptical of my veg food sometimes but he really liked the LÃ¤rabars.

I also practically ate my weight in Field Roast sausages this weekend. I had about 12 samples over the entire weekend from Field Roast, my favourite flavours in order were Mexican Chipotle, Italian, and Smoked Apple Sage. The sausages are made from seitan, which is a mixture made from vital wheat gluten (so not gluten-free), so they’re full of plant protein and the different flavours they have are totally amazing. I’ll be using some Mexican Chipotle sausages in my post on Thursday (using some sauce that I’ll post tomorrow), and seriously, y’all need to go get some right now because they are the bomb. Chris is a definite omnivore, but he really liked these. He kept asking me to come back to that booth so he could get more. 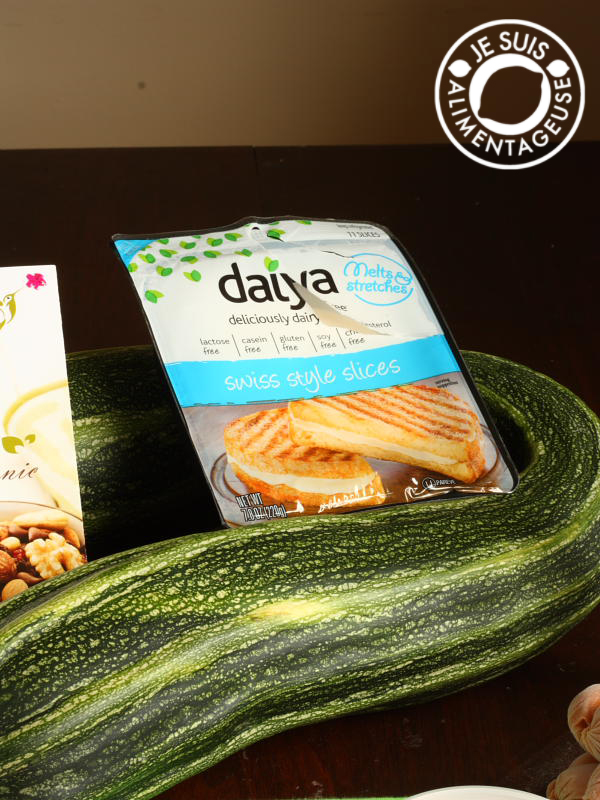 Depicted above I have an opened package of Daiya Swiss-style cheese slices (sorry guys I got hungry last night), and as someone who LOVES cheese so much that it’s actually impeding my transition to vegan, Daiya has some awesome products that are soy-free, dairy-free, and just pretty delicious in general. At their booth, they had a cream cheese spread, some pizza, and apparently these slices, because they started giving out these packages to volunteers at the end of the festival.

I tried their cheddar shreds once, and I wasn’t a fan because when they melted, the fat kind of separated funny and they didn’t taste that great, but I really like the cream cheese spread and the Swiss-style slices aren’t too shabby. I’m going to try them later on a casserole and we’ll see how it goes! Daiya’s booth was another one of Chris’ favourites. He liked the plain cream cheese and the pizza, but I thought the strawberry and the chive and onion were better.

Sweets from the Earth also had these AMAZINGLY dense and delicious brownies and cookies for volunteers, and I’ve had their cashew butter cookies before and they are totally delicious. 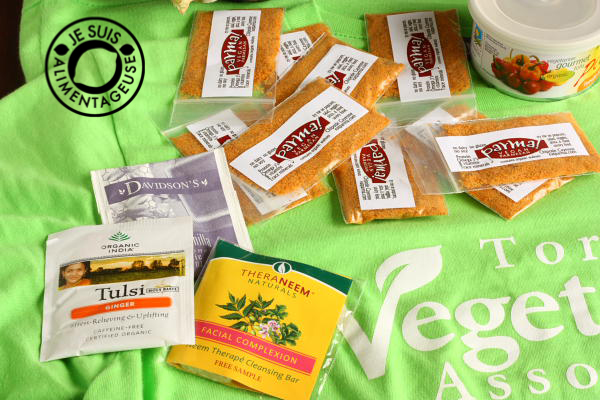 I also assisted with three cooking demos, the first was for JennÃ© Clairborne from The Nourishing Vegan, who is a total sweetheart and I share her love for the amazing food processor. Probably my favourite appliance. Her cooking demo was about 5-ingredient recipes, the first being an avocado and chickpea spread to go on some toasted French loaf (SO DELICIOUS), and the other was a raw chocolate buckwheat bar, which was naturally gluten-free and was also really yummy.

I also helped out with Taymer Mason‘s demo, where she did Gourmet Vegan meals. She showed us how to make a seitan ham with Carribean and Christmas-y flavours and a bread pudding. She talked about how to impress your other vegan friends make making them delicious gourmet food instead of just serving straight up fruits and veggies. She was also a lovely lady to listen to and her passion for food and flavours is contagious, and I definitely want to try making some seitan sometime!

The last demo I assisted was with one of Bunner’s co-owners, Ashley Wittig. She made vegan pumpkin chocolate chip muffins and vegan apple pie, and it was so great to hear her talk about how to make things delicious, vegan, and gluten-free. I was sort of MC-ing that one so I would randomly interject with facts like how brown sugar is actually just processed white sugar with molasses added back into it (people were shocked) and I asked some questions about xanthan gum and different blends of GF flour to yield a fluffy baked goods.

All three cooking demos were awesome, and I posted some photos up on Facebook, so go have a gander to see those (I also linked their FB pages if I could find them). 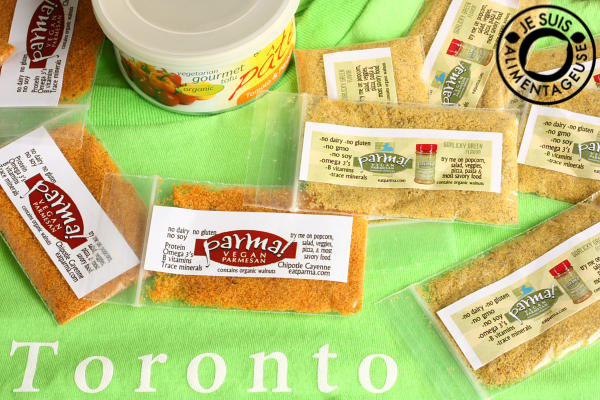 At the end of the festival, I got so many random delicious goodies in my volunteer treat bag when I went to say goodbye to the other volunteers. I got some vegan patÃ©, vegan parmesan cheese, some Frankfurters from Field Roast, the mint chlorophyll bottle of kombucha, a bag of Prana trail mix (it was dark chocolate, walnuts, almonds, raisins, and cranberries, I would have taken a photo but I like consumed it in like 5 handfuls because it was so delicious). I also got some natural bar soap, some tea, and a random snack vegan sausage that I’ll take to school with me today.

And last but definitely not least, someone handed me a GIANT zucchini. And I have a couple ideas for what I should do with it (I was thinking of making a vegan lasagna?) but it’s honestly the size of whole arm but bent in half, it’s MASSIVE. I could make like 8 zucchini cakes with it. So if you have any ideas, PLEASE SHARE. this zucchini is HUGE and I am just one little person. 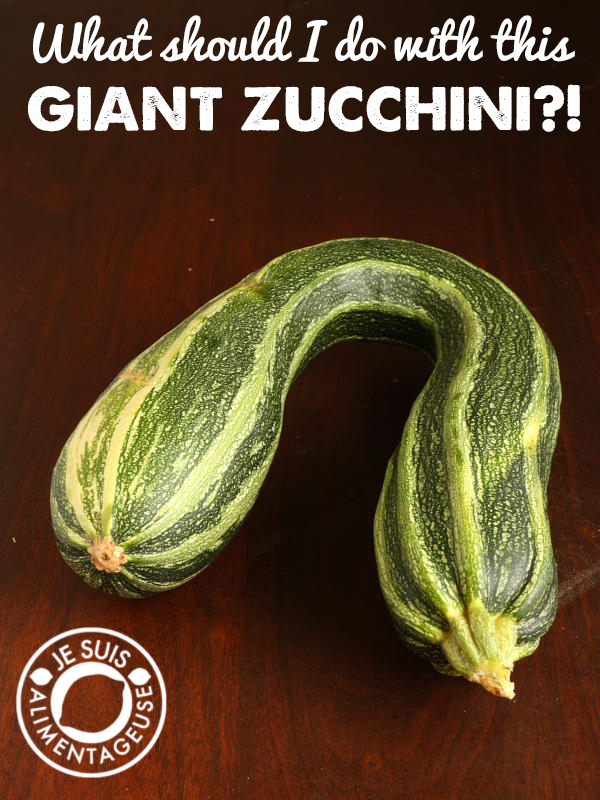 Overall, TVA’s 29th Annual Vegetarian Food Festival was AWESOME! The rain on Saturday just meant that there were more people at the cooking demos, but Friday and Sunday were beautiful days. I’m so happy that I came and met lots of new people and volunteers, and were surrounded by tons of vegans and vegetarians. It’s nice to be in the majority for once =P

I hope that if you went to the food fest that you enjoyed it as much as I did, and if you didn’t come out this year, come next year! It was a huge success and it’s the biggest vegetarian food festival in North America, so it’s worth the trip! There are other booths that are more focused on animal rights and cruelty-free campaigns, so if you’re also interested in the politics of vegan and vegetarianism, you should definitely come out for that. I had a blast, and don’t worry, I’ll post a recipe tomorrow to make up for this long-winded post today!