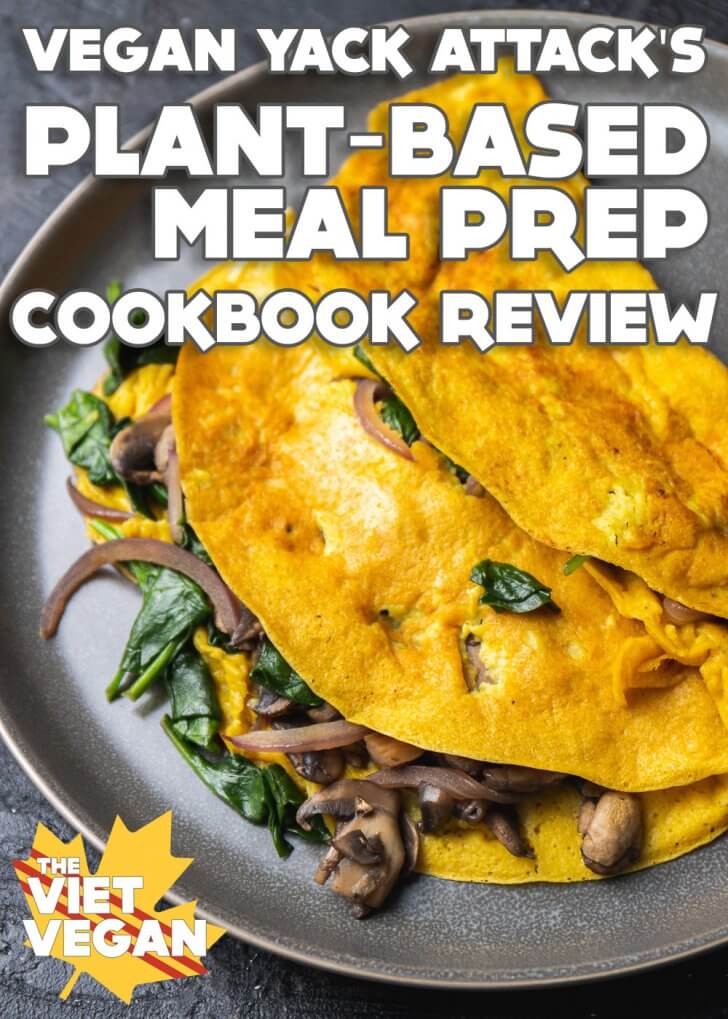 It’s been a long time since I did a cookbook review here, but anyone who’s seen my bookshelf knows that I am low-key obsessed with vegan cookbooks. I love looking at the photos, reading the recipe head notes, seeing what culinary journey I’ll be whisked upon as we go through the chapters… I love cookbooks, ok? A few years ago I did a cookbook feature for January where I reviewed Oh She Glows, This Rawsome Vegan Cookbook, and The Lusty Vegan.

I thought it was high time to delve back into featuring some of the cookbooks I’ve added to my collection, and one of them is Jackie Sobon’s Plant-Based Meal Prep! (affiliate link) I’ve been a big fan of Jackie’s for a long time over on Vegan Yack Attack! She’s always really creative yet makes really approachable recipes. For this cookbook review I made 5 different recipes and I’ve posted one of her recipes down below (probably my favourite one although my execution of it was not great haha). 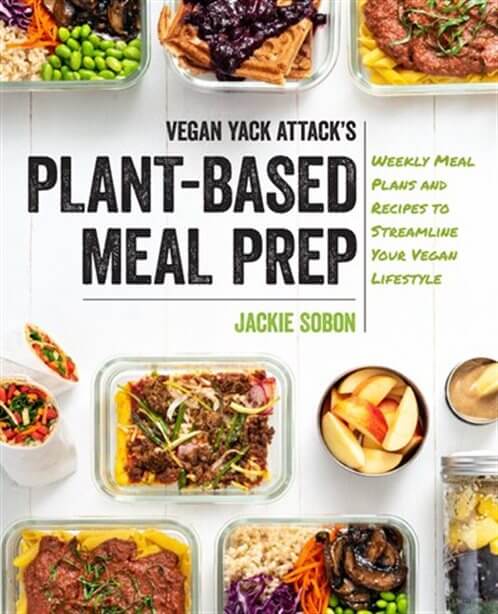 The way this cookbook is structured is really cool. While there’s a traditional breakdown of breakfast foods, lunches, desserts, etc, in the cookbook, there’s also a section of a couple set meal plans for different situations: if you’re just one person, or if you’re 2 or more, which I think is actually really nice and helpful. I have a couple friends who make a habit of meal prepping on Sunday and then all week they are good to go for food, and that sounds so nice. Eddie doesn’t really enjoy cooking so meal prepping would be incredibly beneficial for him, but I’ve learned from this whole process that I am a fickle eater and I cannot eat meal-prepped food in this way. But more on that later XD 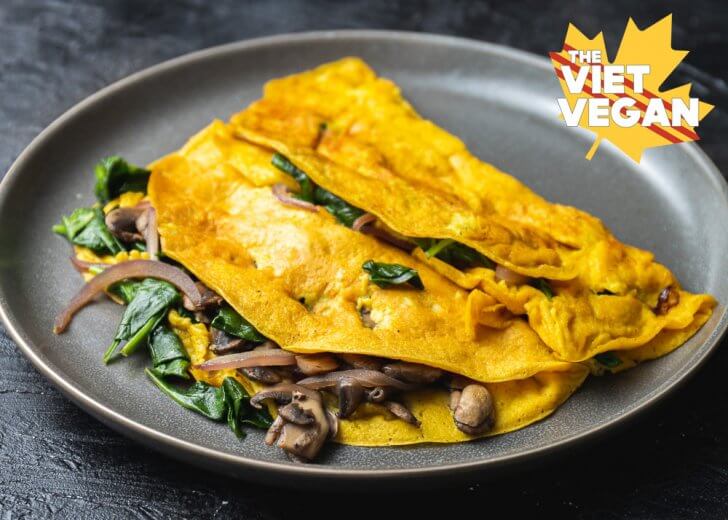 So the first recipe I tried was this mushroom and spinach omelette. Preparing the components of the recipe were super easy, but the actual flipping of the omelette was a bit challenging for me. I definitely would make this as a scramble rather than an omelette because I am not skilled and impatient, so even getting two useable omelettes for this photo was a struggle. Ultimately, the flavour was really good and I really like the eggy seasoning recipe she has in this cookbook! I’ll be using that again in the future because it’s a super easy dry mix I can keep in the cupboard to season anytime. 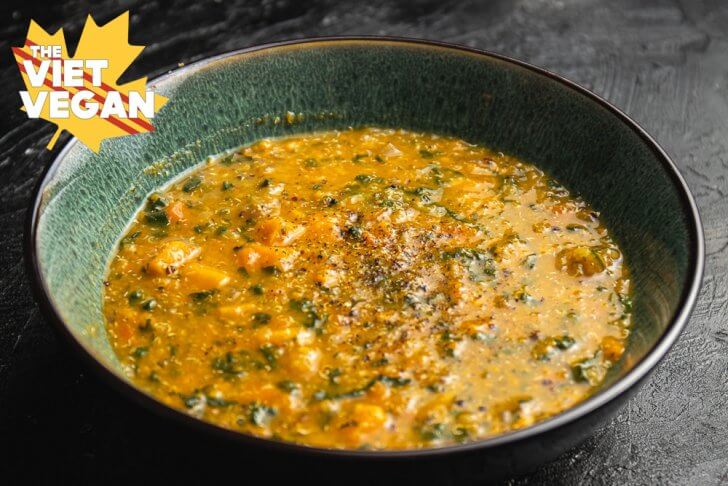 The next recipe I tried was this super hearty quinoa, sweet potato and carrot soup. I think needed a touch of acidity and a bit more oomph with spices, but it is a perfect soup to go with some toasty baguette or sourdough. I always love soups for meal prep and this one definitely packed a lot of vegetables in a bowl. I used whole frozen spinach so in the end it yielded a weird…stringy texture that I didn’t really like, but I think that might have been maybe the brand/quality of the frozen spinach I used. I would recommend using chopped spinach in the future I think though. I think I would add beans to the soup for more protein, ALTHOUGH there’s quinoa in this soup and upon re-reading the recipe, there was supposed to be roasted pumpkin seeds as well haha. But I would still want to add beans. The green is definitely a lovely addition to this colourful soup! 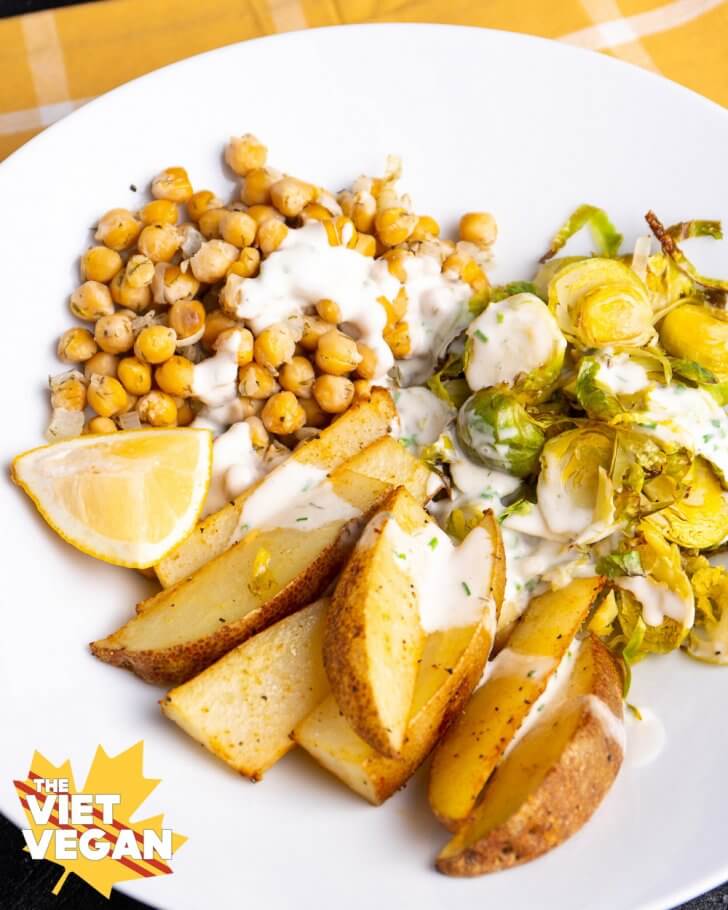 The other savoury dish I tried was this dill roasted chickpeas and potato wedges with roasted brussels sprouts. It is a really simple and easy to pull together meal that I can see be easily added to a rotation for meal prep! I have always been intrigued by sheet pan meals, and while I think this was easy and tasty, I think my palette is just way too Asian and I crave rice too much haha. BUT I do love how affordable and simple this meal is. You basically prep all the ingredients, shove it in the oven and just carry on until it’s ready to eat (or be put into containers haha).

I also made the piña colada chia seed pudding (I forgot to take a picture though) and it was actually SO DELICIOUS. I don’t really love piña coladas as a beverage because I don’t love that smooth blended texture, but MAN the pineapple chunks in with the creamy coconut chia seed pudding is ridiculously delicious. I would make this again FOR SURE. Maybe not in this quantity though, because I’ve also realized that fresh pineapple makes my tongue itchy…haha oops.

Lastly I tried this super nostalgic Chocolate Peanut Butter Rice Bars. I struggled quite a bit with the execution, but mostly because I apparently can’t read and I had to substitute brown rice syrup for the agave nectar, but in the end, I got these incredibly crunchy and satisfying snacks. I snacked on these all week and it really hit the spot with that PB and chocolate combo. The touch of salt is super delicious, and the addition of peanuts and peanut butter with the higher fibre count of the brown rice puffed cereal added to the satiety a lot.

After trying all these recipes, I have come to realize that I have a very specific taste palate right now, and it is basically more geared towards to food I ate growing up, which is either Vietnamese food or McDonalds LOL. I think this is just kind of a phase I’m going through right now but I only crave french fries or Vietnamese dishes, so anything else I eat right now doesn’t quite hit the spot. The only reason I say this is because the video I filmed with all these recipes really highlights how much of a hot mess I am right now (I mean, I’m always a hot mess, but I was EXTRA messy those couple weeks). So needless to say, my experience with Jackie’s cookbook is 100% a reflection of my inability to follow instructions and specific cravings hahhaha. That’s a me problem. This cookbook is actually great.

Anyway, upon looking back at these photos, I really appreciate how vegetable-focused and unprocessed the recipes are in the cookbook. There are lots of really affordable recipes with a variety of cuisines and types of meals for people who just need some easy and approachable recipes. Definitely give Jackie a follow on Instagram to see her BEAUTIFUL photography and check out Plant-Based Meal Prep (affiliate link) if you are a meal-prepper and want some new ideas.

The Viet Vegan is a participant in the Amazon Services LLC Associates Program, an affiliate advertising program designed to provide a means for me to earn fees by linking to Amazon.com and affiliated sites. I received a digital copy of this cookbook in exchange for a review. All opinions are (obviously) my own lol.