This fall favourite is a careful balance between tart and sweet,
baked until golden and apples tender, to get the perfect vegan apple crisp. 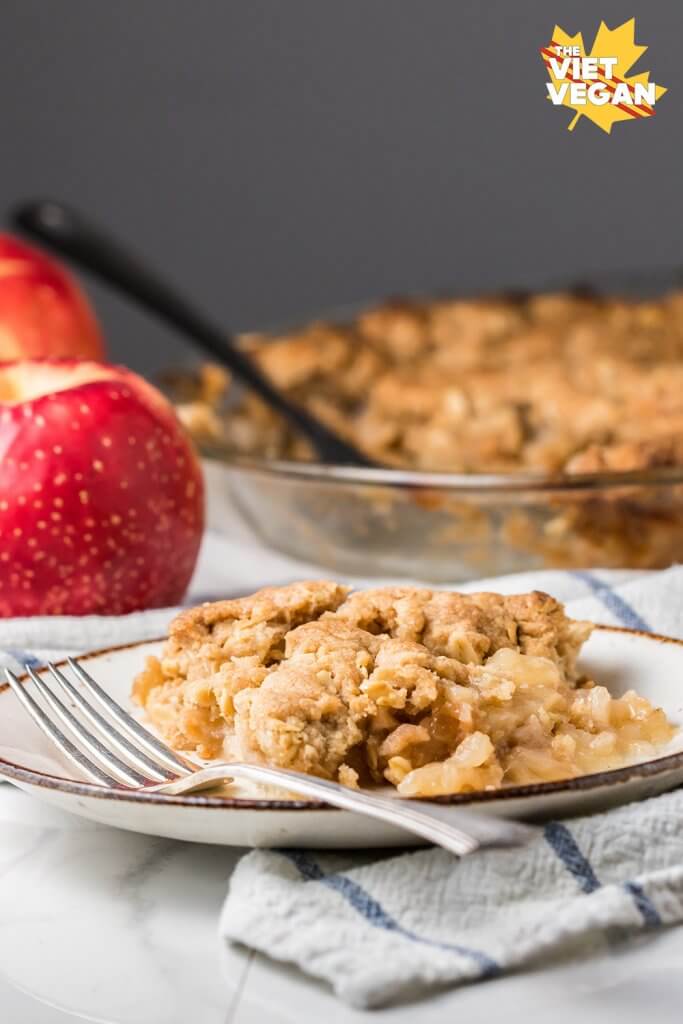 It’s been a little while since I last posted a recipe, sorry about that. Frankly I’ve been eating a lot of pretty random meals and not many of them recipe-worthy. I have a few savoury soups coming up that I’ll share, but for the most part, it’s been some sort of vegan protein (baked tofu or some Gardein fishless filets) alongside some air fried Brussels sprouts, broccoli, or some blanched green beans.  Not the most exciting subjects for my Instagram either, so it’s been relatively quiet there too.

I’ve been taking some time to decompress after a pretty stressful summer, but mostly I think I was avoiding dealing with things for a while. I had let some things in my personal life go, and it was finally time for me to brush off the dust and get things up and running again. The only problem was that I had hit the ground running before I was ready, so I pretty much instantly got knocked back down. 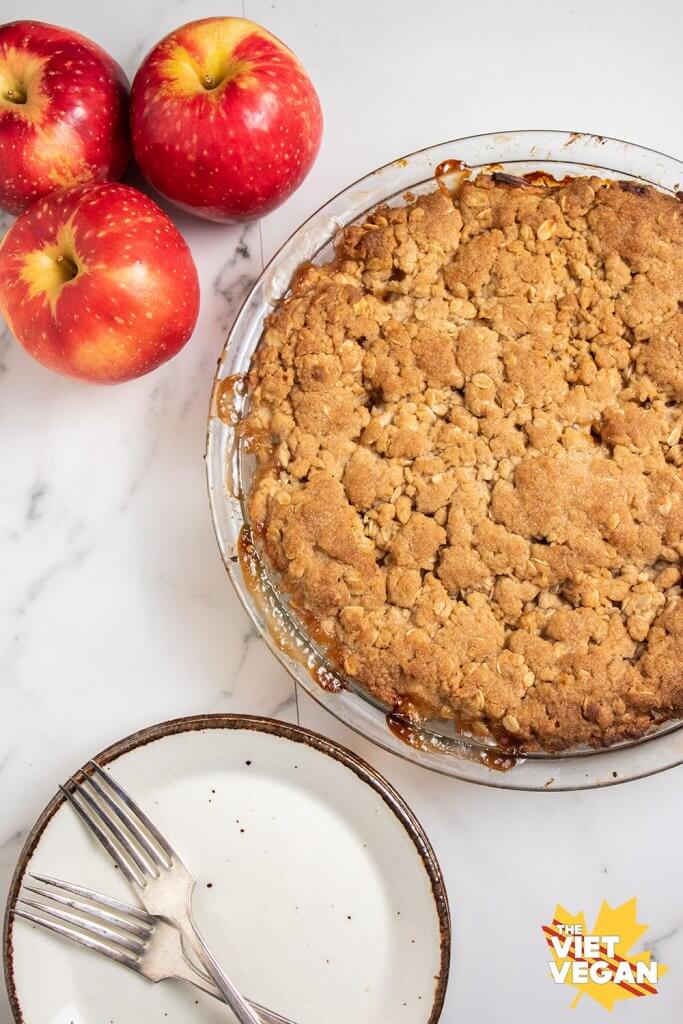 I’ve taken some time to recoup, spending time with family, time alone, escaping in some worlds here and there. I used to just compartmentalize and get things done and trying to recover in the downtime, but after a certain amount of time, the time I could be up and running between breaking down got shorter and shorter. I had to finally just sit and let go.

Life is too short to be running at full speed all the time, and that stressful feeling of always having to get things done was not the feeling I wanted to have for the rest of my life. Life will always be busy, it is always demanding, but the one thing I was determined to change was to stop letting it control my mind and body to be constantly in that fight or flight mode. It sounds so new-age and radical, the idea of just living life a little slower. I liked the feeling of accomplishment after all the hustling, but not the hives and exhaustion that came after a particularly stressful bout of it. 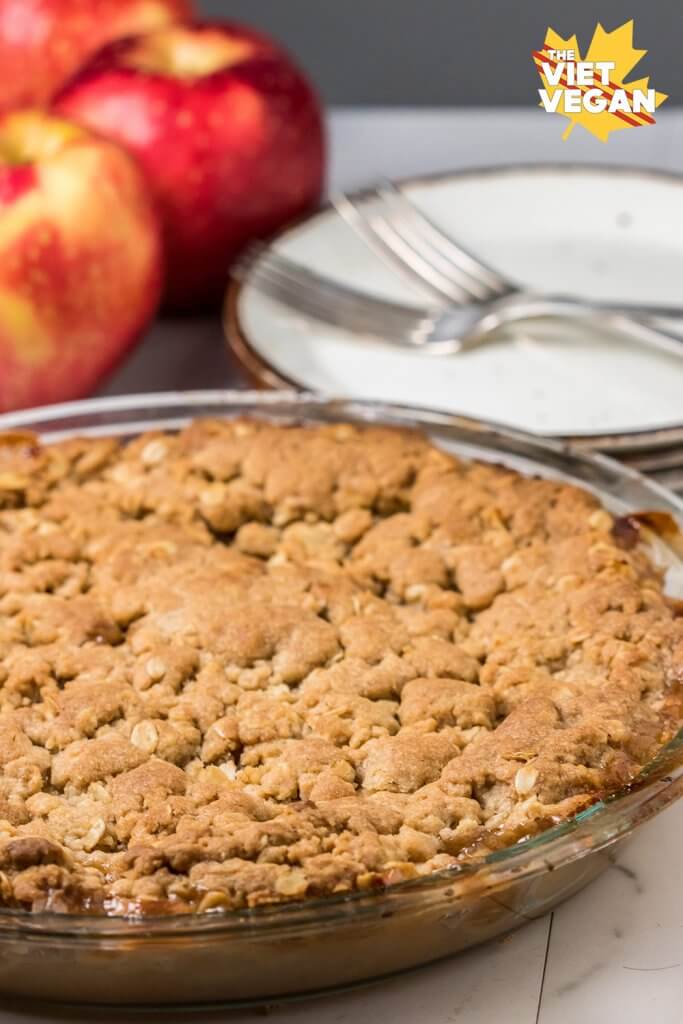 So I am now transitioning to a slightly slower lifestyle. Lowering my expectations of myself because life is short and I don’t want to live every day as a hustle. Testing recipes at my own pace instead of trying to meet the demands of the “standard” youtube cooking channel and blog. I might not make as much money, I might not be as successful, but I won’t be stressed out all the time and aging faster than I should be. So maybe that’s okay in the end.

In any case, my slower pace meant that I could test this recipe several times before I got it out to you. A simple vegan apple crisp, not too much fuss, not too many ingredients, and relatively fool-proof. Oats to make the streusel extra crisp, a touch of brown sugar to add caramel flavour, and of course, plenty of cinnamon to bring out the fall deliciousness of apples.

Plus it’ll help you eat all those apples you picked that are sitting in your fridge, awaiting to be used up. 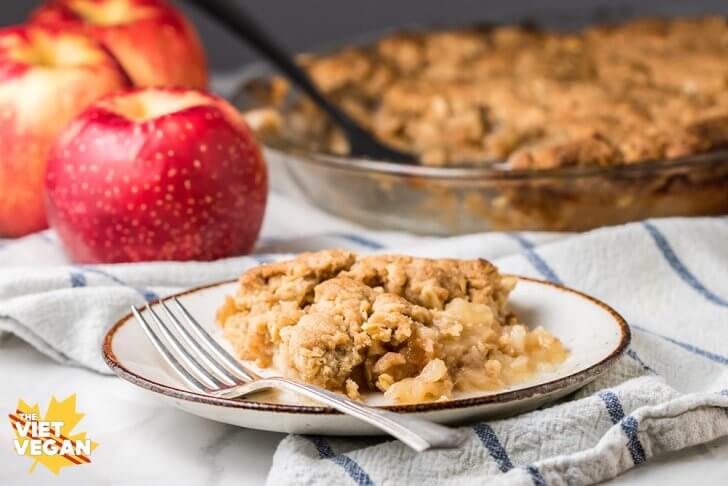 *I used Macintosh and SweeTango apples here, but Red Prince, Idared, and Spy are also great options. You're looking for apples with some tartness to balance out the sweetness of the dish.