I’ve been holding out on this vegan creamy baked mac and cheese
but only because I normally eat before I remember to photograph it.
It’s just like the dairy mac and cheese you remember growing up,
BUT WAY BETTER. 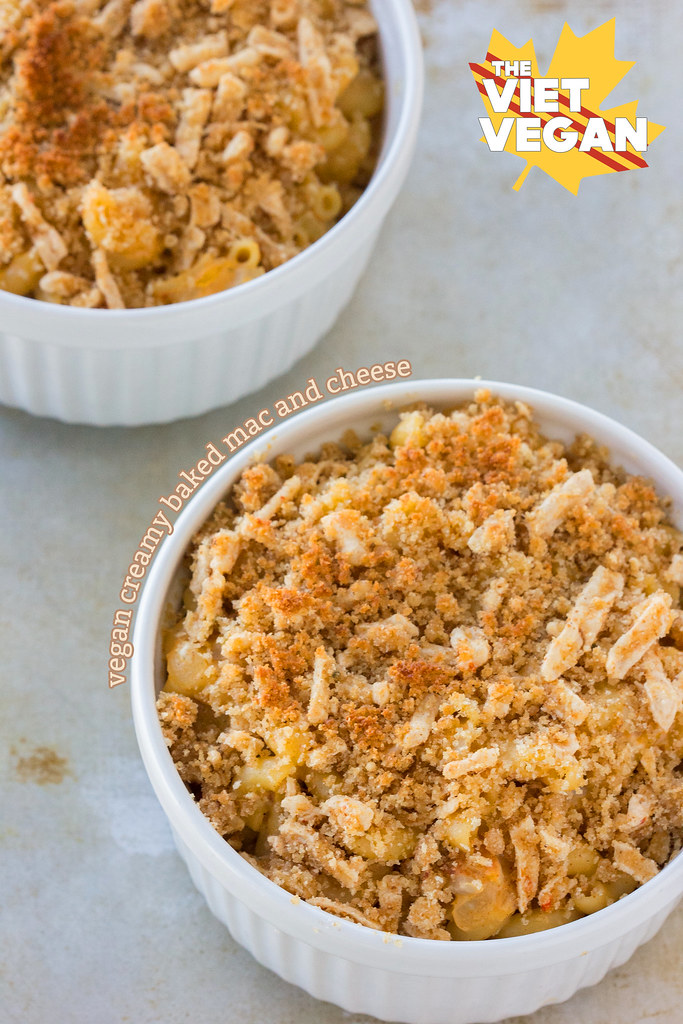 Burritos. (I’m sure you get where this is going)

Let me just give all you folks who are dating out there some advice: don’t eat burritos on a first date. Or actually maybe do it. You decide based on the outcome of this story.

So in my last post, I talked about my dating trials and tribulations, mentioning the Runner, Mr. Summer, and lastly, Burrito Boy. Things with The Runner and Mr. Summer didn’t quite work out, but things are looking up for Burrito Boy, so I thought it was time I shared our first date. 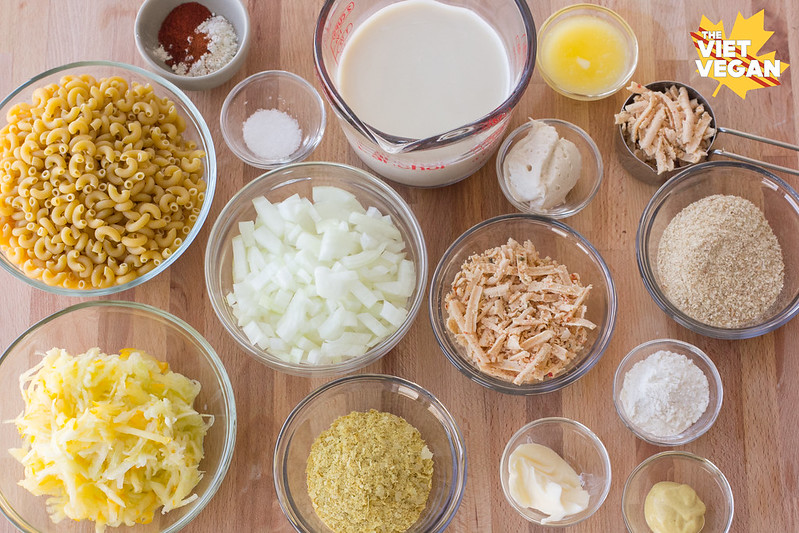 OKCupid and I didn’t have the greatest start. Actually I was terrified. I signed up for OKCupid by plugging in my email, a password, and then up came the page where they tell you to fill out all this information about you to meet people. I promptly panicked, closed the browser, and then walked away wringing my hands and making awkward sounds.

It wasn’t until a week later that I got an email from OKCupid saying something along the lines of, “Hey! We noticed you haven’t been browsing the meat market, so here are some choice picks we thought you might like!” (Not actually their words, but I’m paraphrasing.)

Curious enough, I opened the email.

Scrolling through I saw a bunch of moderately good lookin’ dudes, yet the one that caught my eye was some bearded nerd whose face I could barely even see because he was wearing sunglasses. But he was making kind of a goofy face and that caught my eye.  So I clicked through, read about him, and was intrigued. I’m not sure what exactly I did next, but I know that I was still too panicked to send anybody any messages. I probably got distracted and walked away from the computer yet again. However, the next day, I got an email from OKC saying that the bearded nerd was “checking me out”. Except my profile was completely blank.

AAAH HE LOOKED AT MY PROFILE AND THERE’S NOTHING THERE.

I debated between filling it out then and there and then messaging him, but I didn’t want to come across as desperate. So I filled it out, clicked around, started browsing various other dorky nerds’ profiles. A week later, I mustered up the courage to send the bearded nerd a message, something super awkward along the lines of:

“Heeeey so I don’t know if you remember but last week you looked at my profile and there was nothing there. Just letting ya know that uh…I’m not a robot. I’m a real person and I filled it out so it’s not blank anymore so you should probably go take a look.”

Within the day, he responded: You’re not a robot huh? That’s cool except that’s exactly something a robot would say!! :p 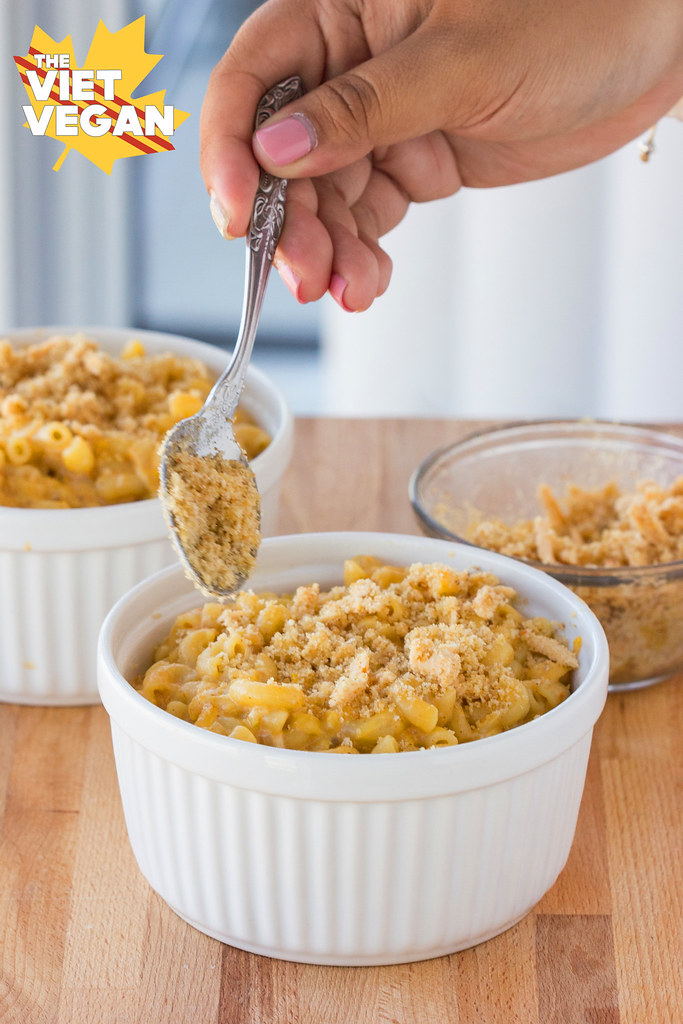 Despite my incredible real life awkwardness, I can be very charming online. Online, I am witty. I have a way of highlighting the best parts of myself with my words. Something about writing for a living and writing a blog for over four years probably helped me develop decent skills for connecting with people online. So we continued to talk and he asked for my number after our first conversation on OKC ended. I almost walked away from the computer again, but then I said,

“What the heck? Why not.” So I gave him my number.

The next day we were texting and we came across the topic of how delicious burritos are. Because let’s be real, burritos are pockets of heavenly spiced goodness. And since I am very passionate about burritos (just ask Janelle, she knows I mean BIDNESS when it comes to good burritos), I asked him where his favourite burritos were from. We discussed the options of good ol’ Burrito Boyz, Fat Bastard Burritos, and of course, Chipotle. He had never had Chipotle, and I REALLY wanted burritos.

“Care for a burrito adventure?” He asked.

How could I say no to burritos? Little did I know it was a poor food choice. But 40 minutes of utter panic later, I found myself donning purple converse, black jeans and my favourite purple v-neck at Square One food court about to meet with Burrito Boy.

As I failed to eat my vegan sofritos without spilling pieces of beans and tofu all over myself, Burrito Boy chowed down on his burrito like a pro, neat and tidy compared to the burrito massacre in my lap. We discussed very important topics like what superhero was our favourite, what our ideal superpower was, and random other nerd things. 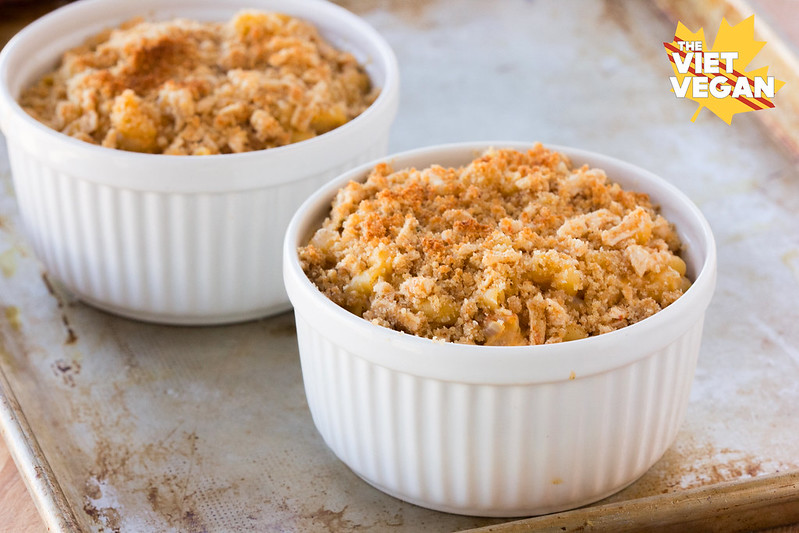 After two hours of people watching and nerdy conversation, we moseyed on to Whole Foods where he got to experience me get far too excited about boxed vegan mac and cheese and organic vegetables. But the boxed mac and cheese was $5 and I was very insistent that I could make better mac and cheese from scratch ( et voilà).

At the end of the date, I remember leaving to go to the washroom and coming out to see this cute nerd with black rimmed glasses in a blue hoodie look up at me as I walked up. I remember getting this gut feeling, I’m not sure how to describe it. But we exchanged a warm yet quick hug and parted ways. I walked away feeling a little giddy with a stupid grin on my face.

And that’s how I met Burrito Boy =P

Anyway, this mac and cheese is ultra creamy and delicious, with a crispy baked crust. I fed this to some die-hard cheese lovers and one of them even said it was their favourite mac and cheese! *fist pump*