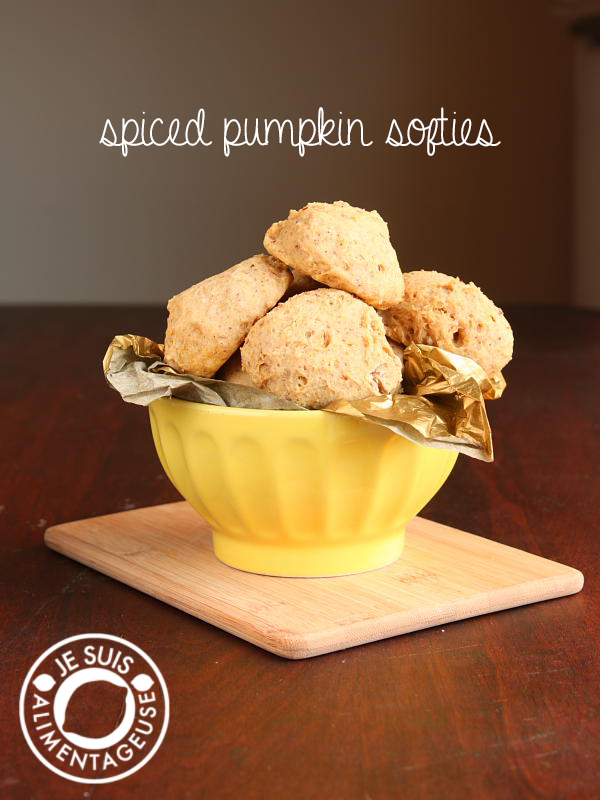 I’m seriously on a huge pumpkin kick right now and I’m totally into it. These spiced pumpkin softies are so soft and warm straight from the oven, they’re like little puffy clouds of pumpkin and spice. I ate about 4 while photographing these (and subsequently broke my favourite lens from being careless), and when I brought these over to a friends house, I continued to eat another 3 or 4. They’re so addictive and fluffy, just like their non-vegan predecessors.

Because I substituted the sour cream for pumpkin spice, Earth Balance (vegan margarine)Â instead of butter, and used flax meal as egg replacer, these are totally vegan! Every time I tell my friends that whatever I’m feeding them is vegan, they have this look of surprise, usually followed by the phrase, “Really? There so good!” And then some of them backtrack and clarify that they don’t assume vegan food isn’t good, they just are surprised that it’s as good as non-vegan food.

Eating vegan doesn’t mean I have to eat cardboard and cold salad =P It can mean fluffy, spiced cookies with lots of fibre and plant-based goodness at the same time =)

Stay tuned for more pumpkiny things. I still have about 1/2 cup of pumpkin purÃ©e leftover, and I have two small pumpkins to roast and purÃ©e for a pumpkin pie later this week. Whoo fall and pumpkin phases =)