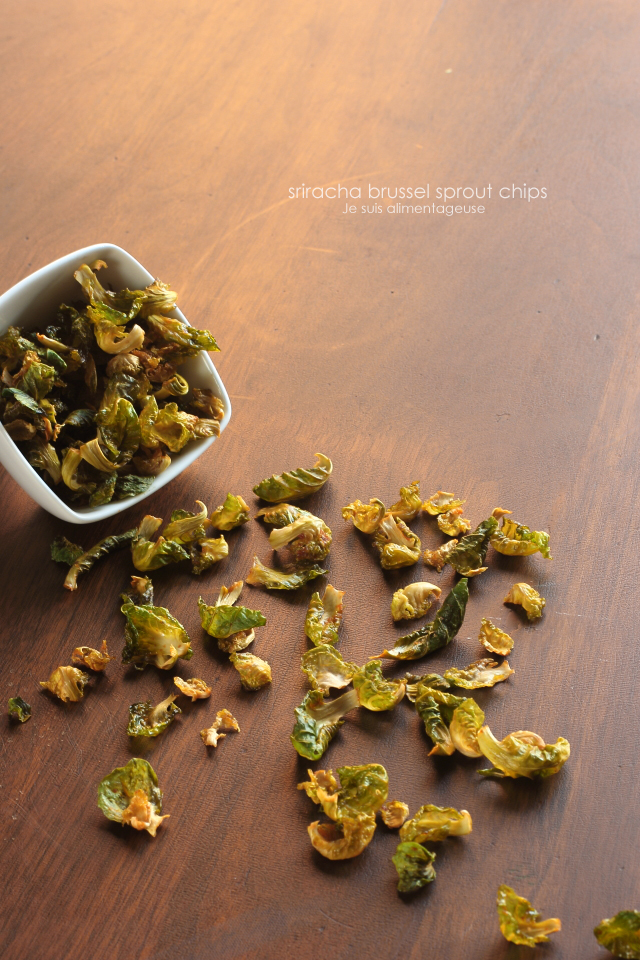 June always seems like new and shiny to me. It’s the end of spring, beginning of summer, and is when I really feel like shedding any old habits I have. Stress-eating (something that only started this winter), unhealthy sleep habits, lack of exercise… My health took a little dip in March, April, May, but now I’m springing back. Healthy choices, happy choices.

I’m going strong and vegan, there’s no problems there. Every now and then I have to do something for work with dairy, but I’m not kicking myself too much for it. I’m not gorging on cheese or anything, it’s just eating what’s leftover from my photography projects because otherwise it’s a waste.

Honestly though, I don’t miss cheese that much. I thought I’d have a harder time, but things like Daiya cheese or just not feeling bloated and uncomfortable (on top of the peace of mind) is enough incentive for me to stick to my guns. 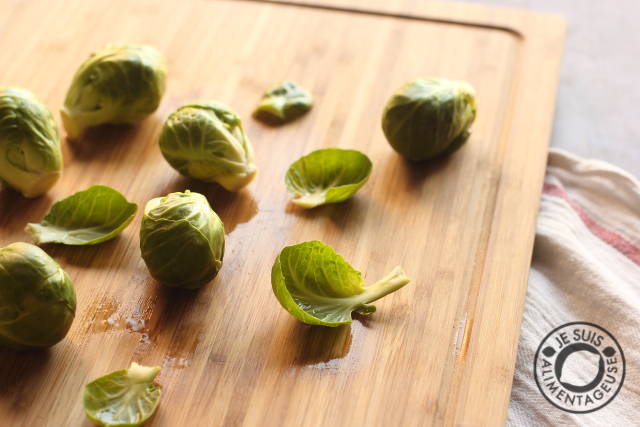 I have noticed some bloggers and friends following different diets, like raw-til-4 or 80-10-10, which are both awesome plant-based diets, but even still too regimented for me. I just want to eat what I want to eat. If I’m feeling more pasta one day, or more coconut ice cream another, I’ll just do it. My diet is mostly fruit and vegetables anyway, and often I end up eating monomeals (like 3 mangos in one sitting or half a watermelon for lunch) because I’m lazy and fruit is delicious. There are other veggies like zucchini and red pepper in there somewhere too.

But Laura Miller from Raw. Vegan. Not Gross.Â did a video where she made brussels sprout chips as a movie snack. GENIUS. I love popcorn, but I like switching up my crunchy snacks every once in a while. Her brussels sprout chips turned out to be a lot bigger and brussels-sprout-y..? But in any case, you’ll get some crunchy delicious all up in your mouth. 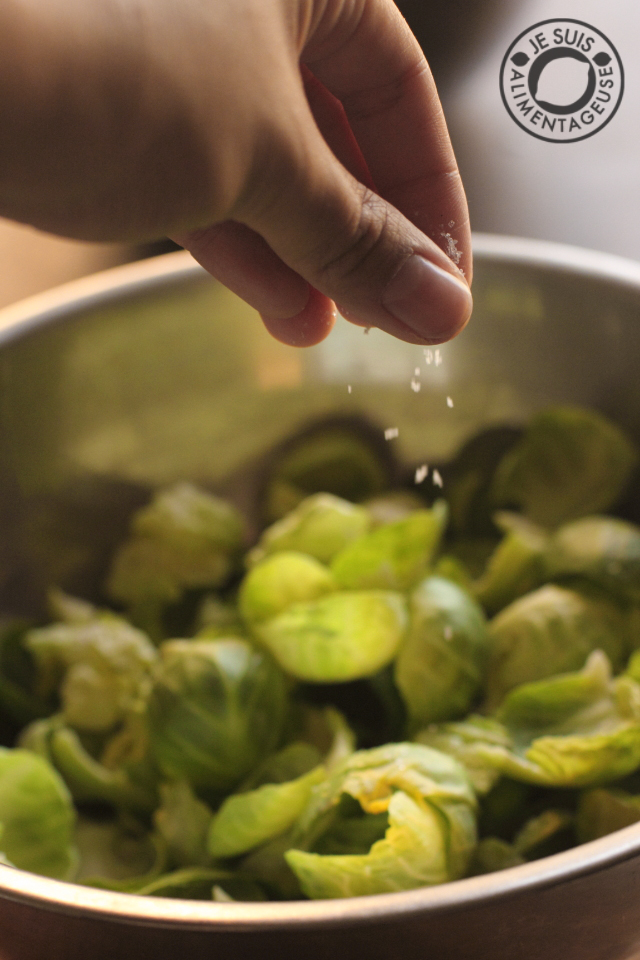 Brussels sprouts are one of those foods that people hate. Like spinach. Or beets. I love all of those things. I actually only had brussels sprouts for the first time back when I first started this blog. I halved them then roasted them with olive oil, salt and pepper. OH MY GOD THEY WERE DELICIOUS. I think I ate the entire pan because Chris was not a fan, which resulted in some indigestion. According to a quick Google search, this is because of raffinose (trisaccharide) in the sprouts that can result in unhappy times in your stomach.

I learned my lesson. I will not eat an entire pan that way again. Pairing it with some other foods like some grains and veggies will help ’em moving along.

Brussels sprouts are actually super good for you. Lots of vitamin C, fibre, vitamin K, some vitamin A, iron, and potassium (Source). They’re low on the glycemic index and therefore are low-cal, and they’re basically mini cabbages. ADORABLE. 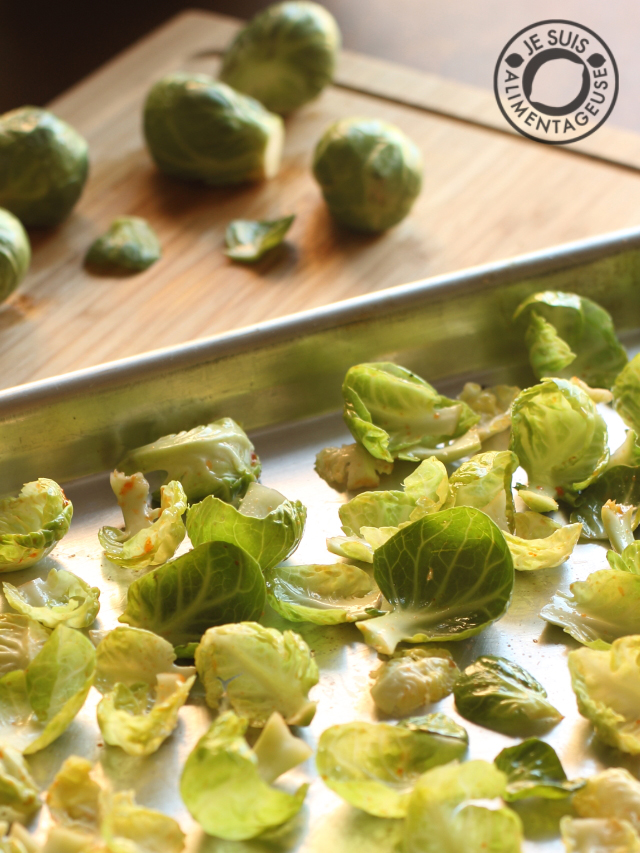 I just recommend washing them really well, and roasting them until they’re super crunchy. The first batch I made was only roasted about an hour, and they were okay, but ultimately still weirdly chewy. The second batch I made I roasted for just under two hours and they were browned super nicely (oddly you can’t really tell from the photo) and completely dry and crisp.

One bag of sprouts from the market is about 30 sprouts, but only yielded about two sheets of chips, maybe a cup and a half in the end. Two servings of chips for 2-4 hours (depending on how big your oven is). Some may not think it’s worth the time, but they’re a fun little snack and a good way to get brussels sprouts into some bellies that would otherwise not make it past the lips.

If you have a dehydrator, I think it’d be fun to try instead of the oven. One day when I have the counter space and the cash for a fancy dehydrator, I’ll be cranking out ALL the raw vegan stuff. 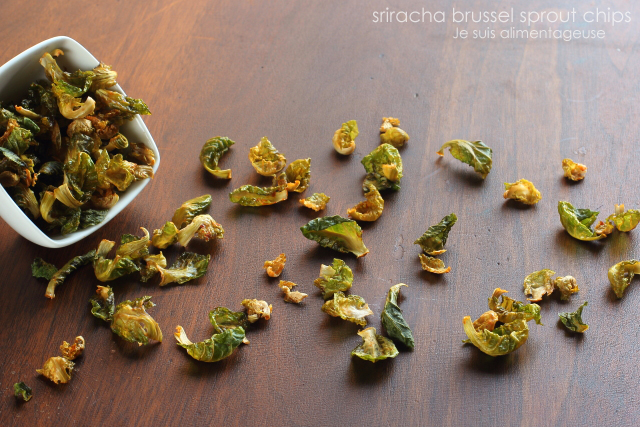 In the meantime, your oven will do quite nicely.