This recipe for this vegan ricotta pear, ham & cheese tart is sponsored by California Pears and is such a simple and summery light meal! Perfect alongside some sangria or rosé ;) 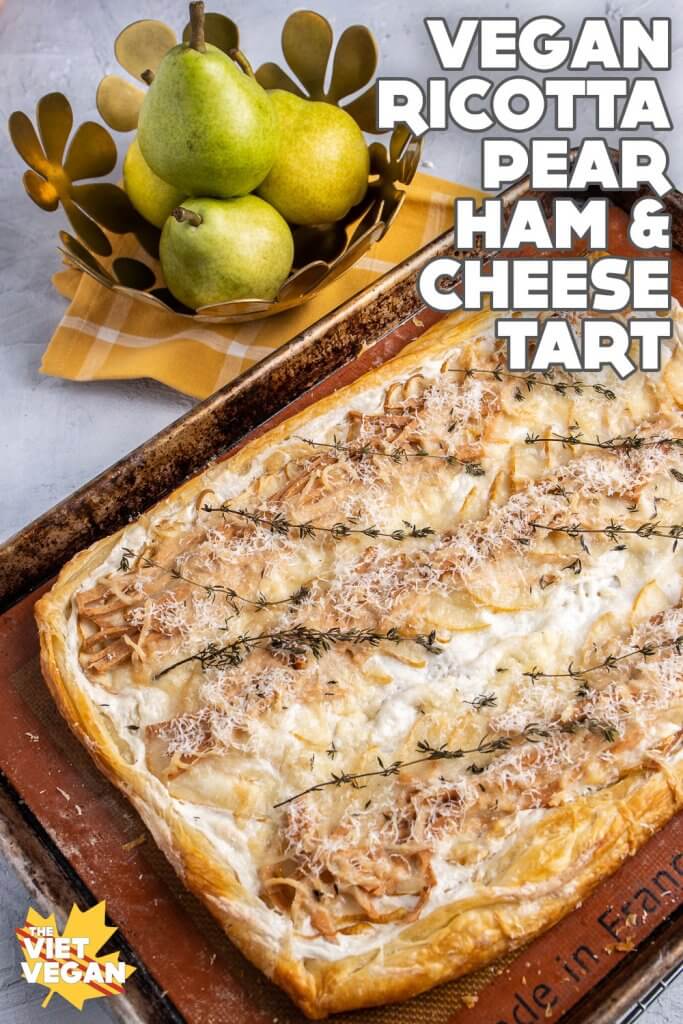 My body has been craving baked goods and fresh fruits because during all this time at home, I’ve been watching The Great Canadian Bake Off while lusting after all the fresh summer fruits that are coming into season. I don’t know how anyone can watch that and not want to bake up a storm of cakes, tarts, breads, pastries and cookies?! Of course, since it’s summer, and during the heat waves I’ve been pumped about enjoying California Pears as a snack for breakfast or a mid-day pick up for when I want something sweet but won’t weigh me down.

I’ve strategically been buying California Bartlett pears in varying shades of green so I can stagger the ripeness and enjoy them when they’re as ripe as I like them! The greener they are, the crunchier they tend to be, and as they ripen the turn yellow and become those juicy, soft, pears that are just so dang delicious. Plus they have the bonus of being good sources of fibre, Vitamin C, potassium and folic acid, so I feel pretty good about reaching for a second pear after I devour my first one. 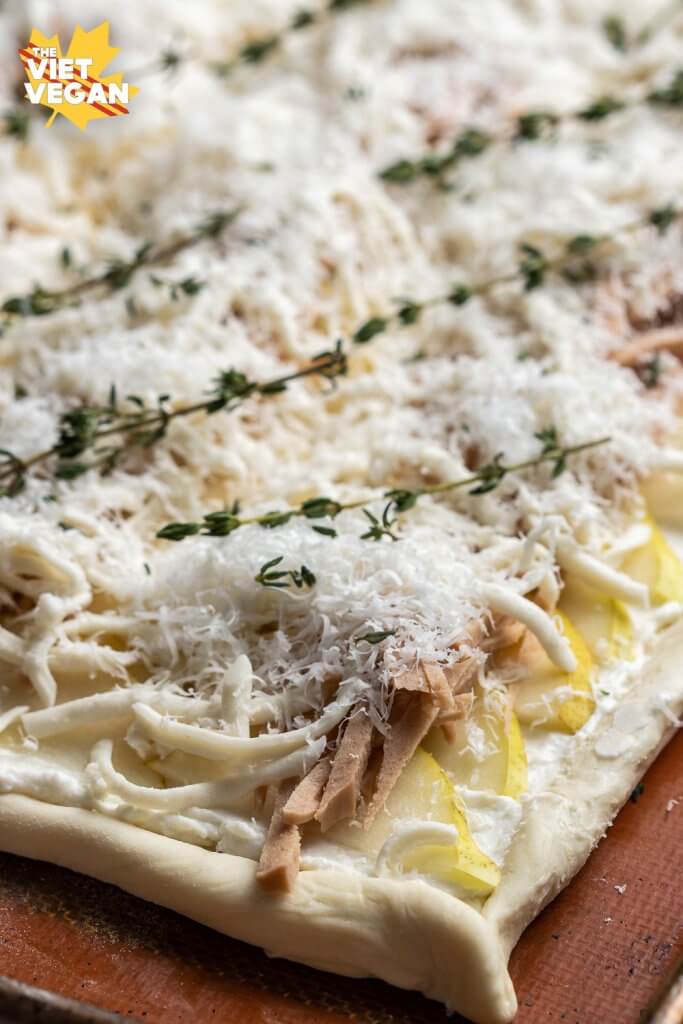 With this vegan ricotta, pear, ham and cheese tart, I can realize my Great Canadian Bake Off dreams with my own vegan savoury baked goods and not feel the crippling pressure of a timed challenge and judges. (Also I’m vegan, and they use an awful lot of butter, milk, and eggs on that show)

Both Eddie and I are suckers for anything made with puff pastry, so naturally, this sweet and savoury tart was polished off in a matter of minutes. 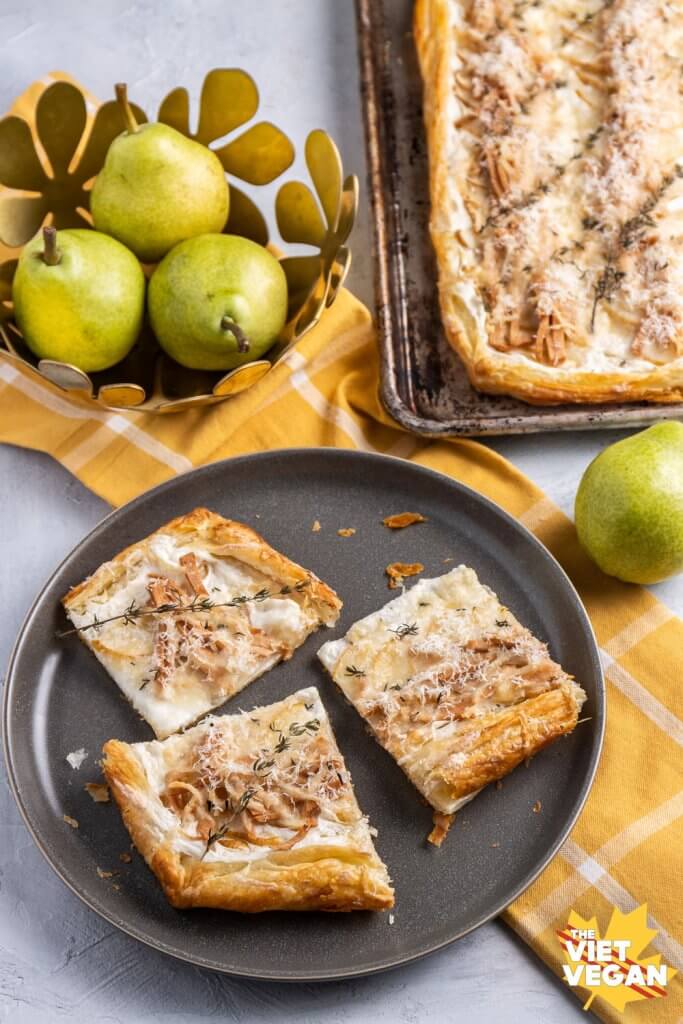 My birthday month is finally here and it’s unreal to me how quickly summer has come and nearly gone, even though we’re all cooped up inside and trying to navigate how life will resume once our communities are trying to figure out what to do next to keep everyone safe. Having tons of fresh fruit and veggies around has been making me feel a lot better about not being as out and about as I normally would in summers (hiking with friends especially!)

With my birthday coming up in a couple weeks, I’m struggling to figure out the best way to celebrate safely while still being able to feed my friends on some sort of socially distant outdoor excursion. Sharing birthday cake isn’t really feasible right now, but having a picnic basket of sandwiches and some ripe California pears seems like a delicious and portable cliff-side repose. 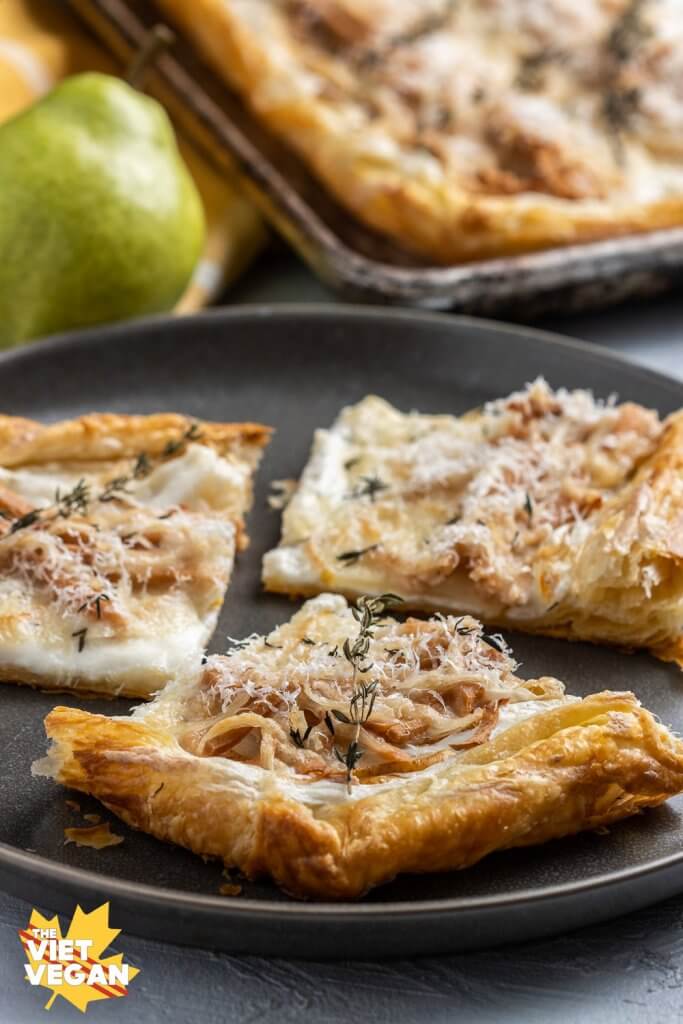 In any case, this flaky tart is a creamy, sweet, and cheesy good time, anchored with the saltiness of the vegan ham. I definitely will be making this again and again (especially since the log of vegan ham I have is HUGE) and Eddie just wants more puff pastry meals like this. I mean, how can you go wrong with puff pastry?!

This recipe is sponsored by California Pears! Learn more about the 60 family farms that grow these delicious summer gems by visiting CalPear.com!