Disclaimer: I was hired toÂ do food photography for Bistro Fresh but I developed this veganÂ red coconut curry with chickpeas and potatoesÂ for JSA.
The farm tour was an unpaid media tour for Bistro Fresh Potatoes at the Downey Potato Farm. 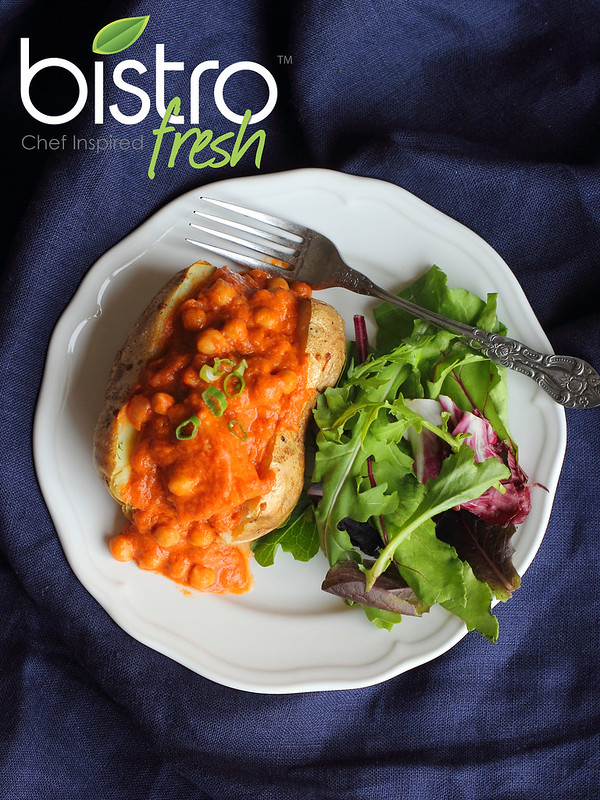 Earlier this month, I was able to visit Downey Potato Farms to see where Bistro Fresh potatoes were grown. It’s funny, that as a girl who’s lived in a city for the past 10 years, I’ve assimilated so well into the city life that people forget that I’m actually from a small town in cottage country Ontario. Granted, I didn’t really have the same small town experience Chris did, what with the weekends of bonfires and ATV rides, but my town had small-town quirks. Kids would snowmobile to school, there was only one cinema in town with 4 theatres, and the closest thing to a mall we had was a Zellers with a The Bargain Shop! in the same building. I digress. The point is, I’m not afraid to get dirty. 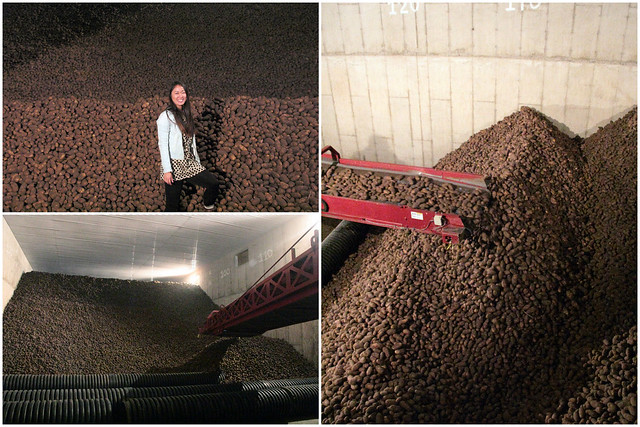 Exhibit A: When given the chance to jump into a MOUNTAIN of potatoes, I will do it.

These pictures can’t even do justice the utter shock that is seeing this many potatoes ever. Trevor Downey, the fourth generation potato farmer at Downey Farms, showed us one of his smaller storerooms for potatoes. This one was 180 feet deep! I can’t remember exactly how high, but I want to estimate it was about 30 feet high. Those black tubes are interspersed into the storage facility and pump air through to ensure proper ventilation and temperature control, so the potatoes store well and we can enjoy potatoes all year round. 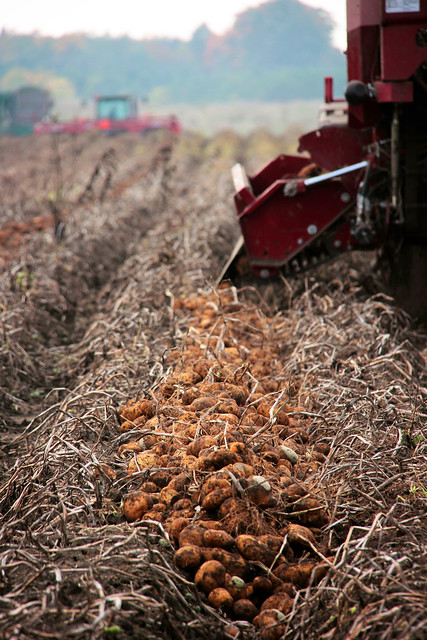 Next, we visited one of the fields that was harvesting the potatoes. We’ve become accustomed to a sort of luxury,Â where we buy our food at the grocery store where things are beautifully cleaned and arranged so that all we have to do is select and pay for our bagged produce or bulk items. We often forget about how much time, effort, and hard work goes into growing, harvesting, testing, packing, and transporting that food.

Agriculture has come so far along, with heavy duty machinery that cuts down the time it takes to harvest food to a fraction. In the photo above, you can see the potatoes conveniently piled into one row. These are four rows of potatoes that are harvestedÂ out of the ground and collected into one row for the sorting machineÂ below.Â The potatoes are then sent through that green machine to sort out dirt, rocks, roots, and whatever else, and then sends those potatoes off into the red truck. 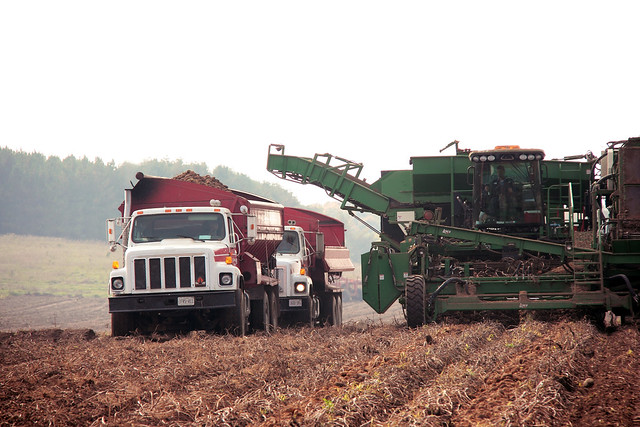 Exhibit B (of Lisa not afraid of getting dirty): If you look closely at the green machine, you can see a ladder. I actually had a chance to climb up on that ladder and watch the whole sorting process. It was so cool to see where technology has pushed the agricultural world forward with this automated machinery. I was geeking out at the sheer genius of it.

But my geeking out over potatoes was small in comparison for Trevor’s utter excitement and passion for potatoes. I kid you not, I’ve never seen anyone more excited about potatoes than Trevor. He pours his heart, all his time, and passion into providing Canadians with the best potatoes he can grow. Just look at him! So excited about potatoes. You’d think a person would be bored after working with potatoes all of their life. Not this guy. 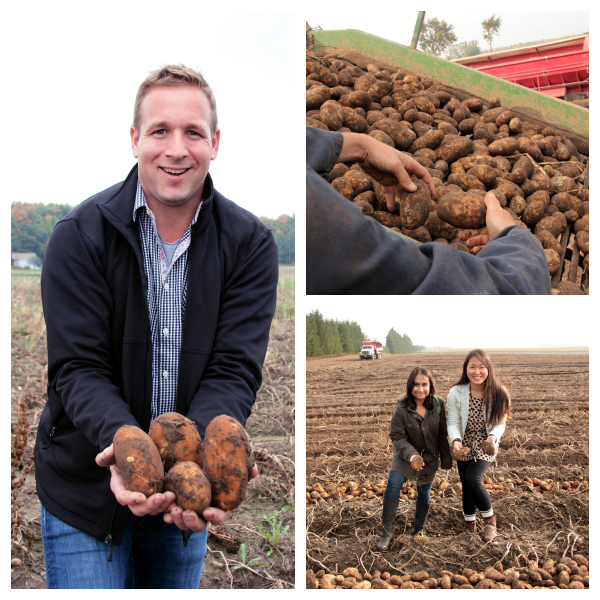 The best way to determine the correct potato for the purpose boils down to looking at starch and water content. Certain potatoes are better for frying because of their low water content, while others are better for boiling because of their creamy texture when cooked and ability to keep their shape. Bistro Fresh has really helpful packaging that specifically tells you what type of potatoes are best for roasting, mashing, boiling, or frying. Even doing research online to see which potatoes are best for which purposes can be confusing.

So to all you health nutters who are all Team Sweet Potato… give potatoes a chance.

They’re actually quite good for you, provided that you don’t smother them in butter and sour cream or deep fry them in a vat of oil. But anything becomes unhealthy when you do that. 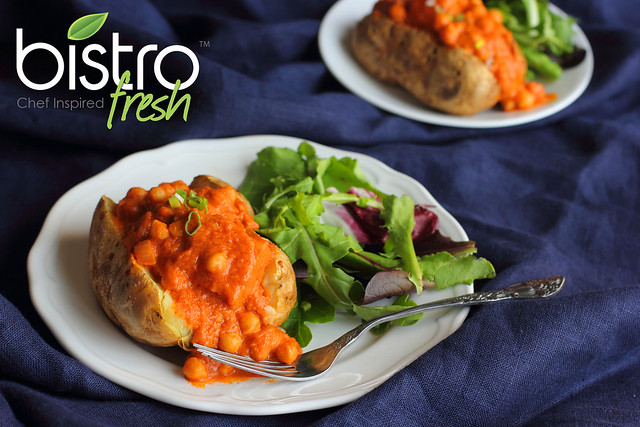 Naturally, as someone who’s vegan, I don’t eat butter or sour cream anymore. I was introduced to the idea of jacket potatoes (more of a UK phenomenon), which are basically roasted potatoes with ANYTHING YOU WANT on top. My version, just as the UK would have it, is topped with curry. Now the recipe below is a curry that has potatoes in it so you can eat it on its own, but since potatoes are so good for you anyway, I decided topping a roasted potato with more potatoes, chickpeas, and smothered in a curry was a fantastic idea. Who needs butter and sour cream when you have vegan red coconut curry, right?