Disclaimer: This recipe for Summer Borscht has eggs in it because it was something I shared before I went vegan. The base soup itself is vegan (the only thing not vegan is the eggs) and I haven’t had a chance to reshoot the recipe yet, so in the meantime, please forgive the photo with hardboiled eggs. 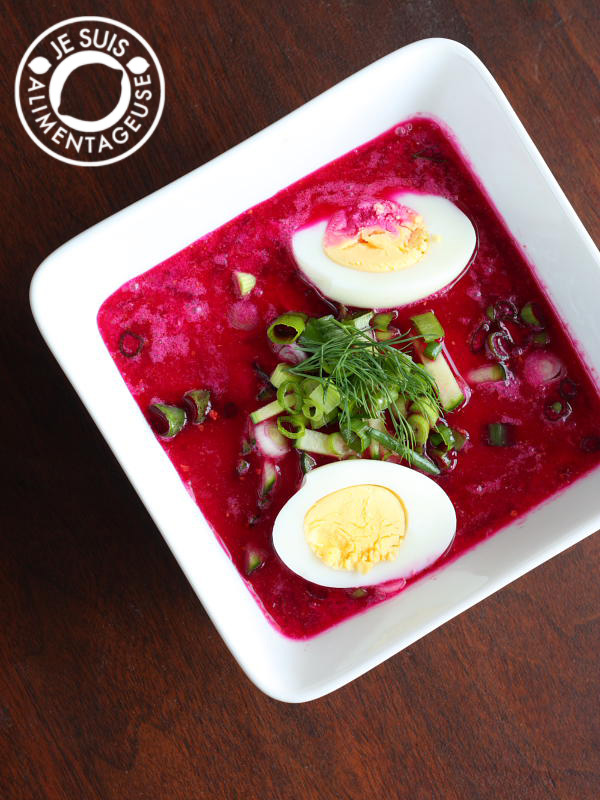 I had another Vietnamese recipe for you but because it’s so hot here in Toronto today, I thought I’d share this refreshing summer borscht soup to cool you down on a hot day. My friend Anastasia, who is the musical director of Musica Reflecta, made me this Russian summer soup and it was the brightest, most refreshing lunch I had ever had.

It’s full of brightly coloured beets in a vinegary broth and complimented with cool, sliced cucumbers, green onions, and lots of dill. The dill really makes this soup amazing, so it needs to be fresh. Topped with salt, and some vegan sour cream, this soup just really hits the spot on a hot summer day. Summer in Toronto is miserable. It’s hot, muggy, and has this gross wind that’s really just a gust of hot air, but this soup just takes you to a whole different place.

But don’t be alarmed if you happen to have pink pee after eating this. I looked it up, and it’s really common to experience what is called beeturia after eating beets. As Anastasia puts it, “It just means you’re awesome and you ate beets,” but I looked it up and some sources indicated that it means your stomach didn’t properly break down and digest the pigments, which is either a result of not chewing your food properly (whoops, guilty. I wolf down my food) or not having a proper pH level in your stomach acid.

Basically, beets are AMAZING for you. They’re full of a specific type of fibre, called beet fibre, rich in Vitamin C, potassium, manganese, and folate. See this website for a breakdown of nutritional facts for beets. Topped with fresh dill, green onions, cucumbers and a dollop of sour cream, this soup is delicious.