Disclaimer: This post includes affiliate links. I was given this box for review and all opinions are my own. Thanks for reading and supporting The Viet Vegan, and I hope you will subscribe to UrthBox to get some tasty, healthy snacks! Just when I think I’ve gotten back on my two feet, I get something that knocks me back down again. Healthwise, I’m fine. Some battle wounds (both mental and physical), but nothing a handful of stitches, Polysporin, and time can’t fix. But amidst some recent drama and an uptick in family obligations in my life, I haven’t had much time to do any recipe development. Buuuut UrthBox sent me a box of snacks to review at the end of July and I’m finally getting around to writing about it.

Some of you who follow me on Snapchat (@TheVietVegan) may have seen my ongoing review of the snacks a few weeks ago. If you missed it, be a doll and follow me now so you don’t miss any more stuff. It’s just me doing weird updates and happenstances, mostly about food. And I just signed up for Periscope (also @TheVietVegan) so if you guys want to tune in on my mundane life, feel free to follow! (I was broadcasting live as I wrote this post because why the heck not?)

So let’s get down to brass tacks.

When the package came in the mail, I eagerly tore it open to see the myriad of snacks awaiting my tastebuds. After carefully inspecting the ingredients, I determined that they were indeed vegan (you can select vegan, gluten-free, just classic, or low carb/diet if you so prefer) and two of the bars had almonds in them so I gave them to a special taste tester to try. The other snacks I pretty much devoured on my own, much to my taste tester’s chagrin. 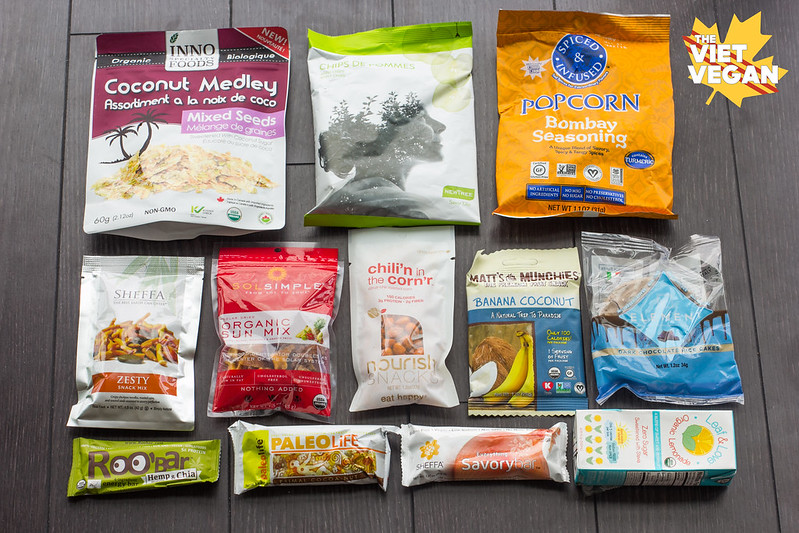 Let’s start with my not favourites:

The Sheffa Zesty Snack Mix and the Sol Simple Organic Sun Mix were alright. I was expecting the Zesty Snack Mix to have a bit more pizzazz and flavour, since I mean, they’re called ZESTY, but it was kind of disappointing. They would have been good on top of soup or salad, but on their own, they lacked a certain zestiness. I was optimistic about these because they’re dehydrated by the sun, which is pretty freaking cool. But they were kind of weird. The mango and pineapple were good, but the dragonfruit was really weird in dehydrated form. And the banana wasn’t like the typical banana chips people are used to, they’re kind of soft and spongey, which made sense as it was a natural, no-sugar-added type snack but again, like I said, not my favourite.

I mean, don’t get me wrong, they were all pretty enjoyable. Aside from the two mentioned above, I liked pretty much all of the snacks in the box. I quite liked the Bombay Spiced & Infused Popcorn, although I was disappointed in the lack of volume. The bag stated it had about 2 cups of popcorn in there, and there was maybe only a cup. I guess it is just a sampler, but STILL! I wanted more.

I inhaled the Chili’n in the corn’r – citrus-chili roasted corn, which was basically just crunchy, healthified Corn Nuts that were puffed, not too hard, and like the perfect amount of salty. They were really tasty, I think I like anything chilli and citrus flavoured honestly.

I also really enjoyed the Chips de pommes appelchips Apple Chips from NewTree. They were a little chewy, but not too sweet. Just natural apple goodness which I like. The package claimed to have 3 apples in there, which I know for a fact can’t be true. I’ve made apple chips before and 1 apple yields a surprising amount of chips. There was maybe 1 apple in there. But I like that they’re organic and that the product is carbon neutral. Pretty cool!

Matt’s Munchies had these coconut banana things that were surprisingly addictive. They were kind of like thin caramels that were slightly chewy, I’d totally eat these again.

Lastly the Sheffa Everything Savory Bar redeemed their lackluster Zesty Snacks with this. This bar was exciting to me because there weren’t any almonds in it and it was savoury granola bar. It was really crunchy, not too salty, satisfying. A really great granola bar that’s savoury as opposed to sweet. I’d pick this over any granola bar, hands down. I think I might try to make something like this too.

I washed these snacks down with the Leaf & Love organic lemonade, and again I was pleasantly surprised. I’m typically not a fan of storebought lemonade because they tend to be way oversweetened, but this was sweetened with stevia and it was pretty refreshing.

My FAVOURITES — aka where can I buy these cause I want them in my mouth:

INNO Specialty Foods – Coconut Medley. HOLY SMOKES THESE WERE SO GOOD. Crunchy, satisfying, not too sweet, and tastes so freaking good. They were like lightly sweetened coconut flakes in slightly crunchy clusters with chia seeds so you didn’t feel like you were gorging yourself on something terrible for you. I’ve been on the hunt for these in stores but I can’t find them anywhere.

I was skeptical about the Element – Dark Chocolate Rice Cakes but these were actually really good. I’m liking the trend that most of everything in this box isn’t too sweet. The treats are indulgent but not too rich, not too sweet. The dark chocolate lost some of its bloom so the chocolate was a pale brown instead of dark chocolate brown, but that didn’t really affect the taste. They weren’t like typical crumbly horrible rice cakes that people eat when they’re on a diet. They were quite firm and crisp and surprisingly really good. I really want to buy these.

Snacks that my Taste Tester Ate:

Since I’m allergic to almonds, I had someone else try these and tell me what he thought of them. He seemed to enjoy both bars, although he didn’t really explain much about how he liked them. Mainly he said that the Roo Bar tasted like fig newtons, and that the Paleo Bar was pretty alright. He’s not typically enthusiastic about anything, so I interpret those as a positive review. I really liked the variety of snacks. I liked that none of them were too salty or too sweet. I’m a little bummed out that there’s $6 shipping for boxes to Canada, but for my US friends, it’s free shipping every month. You definitely get your money’s worth in snacks, and they’re all pretty good. If you want to subscribe to UrthBox, I suggest going halfsies on the bigger boxes with someone else (like your bestie or your boo) so you can divvy up the snacks and have someone eat the ones that aren’t your favourite, plus you get more bang for your buck. OR you can just hog all the snacks for yourself and buy the monthly $19.99 one, which is the size I got to review. I didn’t share my coconut medley snacks, but I know if my taste testers were around they wouldn’t let me keep it all to myself.

Some deals that are for August only:

I have a couple friends who live in the US that make it hard for me to shop for them, so I’m thinking of doing a couple subscriptions for them for Christmas. They’re all healthy and fancy so I feel like this fits the bill.

Thanks again for reading, and a recipe post shall be coming soon!