This simple vegan boba milk tea is based on the sweet, milky tea I had when I lived in Vietnam for a few months back in 2009! So creamy, lightly sweet and full of delicious boba! 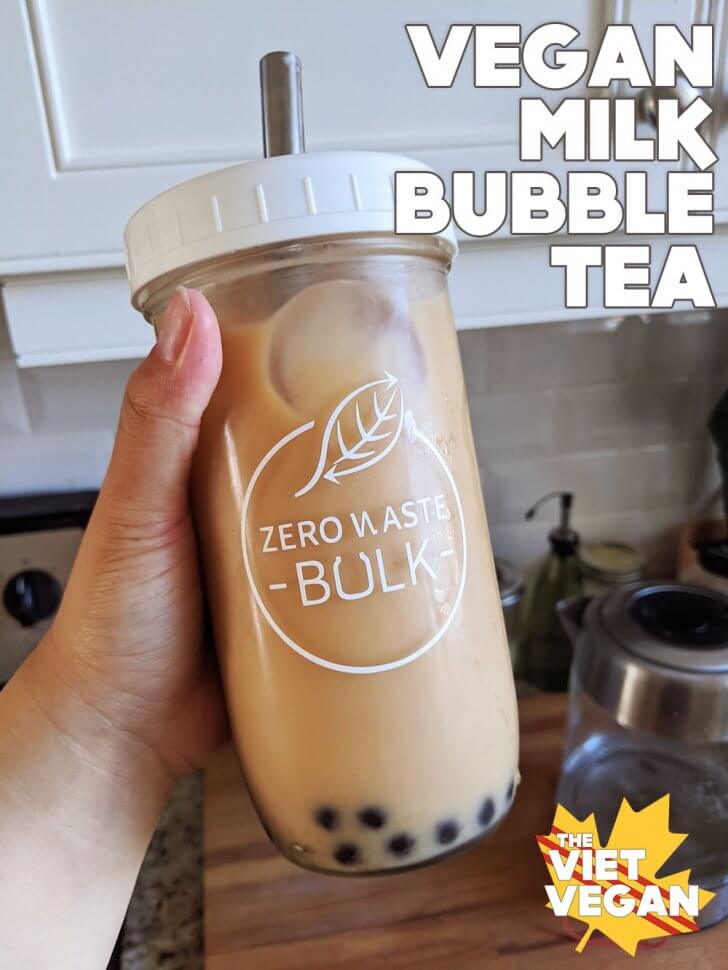 This summer seems the be the summer of nostalgia for me and veganizing some Asian classics (like fire noodles, banh bot loc, thit kho, and braised eggplant)! This bubble tea is based on the original Taiwanese boba milk tea, which is a creamy, lightly sweetened black tea with chewy tapioca pearls (aka boba or bubbles)! Of course as you try different versions, there are more additions like grass jelly (usually vegan!), lychee jelly (also vegan!), popping boba (also vegan-friendly!)

Huh. I hadn’t realized how many toppings for boba that are totally vegan, because most bubble tea places don’t tend to have non-dairy creamers/milks. But now that places like Cha Time are introducing oat milk, now I can get more fun toppings that work better with a milk tea!

For most boba shops that aren’t very vegan-friendly, I usually get a slushy-style bubble tea or a black tea/green tea boba without any milk; but the milky tea is just so good! I’ve tried various black teas, but the one that comes closest to the type of tea I remember is Hong Kong style breakfast tea (which from what I’ve learned is commonly served hot with evaporated milk). I see it in Asian grocery stores in tea bags or as a bag of loose ground tea leaves.

The one I used for this is ground so I brewed it in a larger cup, then strained through a coffee strainer. If you have a fine mesh sieve or tea strainer, that would work too! I was also told that this tea likes to be aerated, so people have told me to pour the tea from high up to “aerate” it? As someone who chronically spills and breaks glasses all the time, I feel like this is a terrible idea for me to do, so I aerate artificially with the coffee filter.

If you want it nicely chilled like at bubble tea shops, you can use a cocktail shaker with ice to quickly shake up and cool the tea, then pour the tea over your fresh boba, add milk and ice to your liking! Shaking up the tea quickly with the ice cools the tea faster so it has less time to melt the ice (and thus diluting the tea). If you were like me and inexplicably lost/donated/threw out your cocktail shaker somewhere in the last move, then you can just skip this part and just have slightly diluted tea.

For the milky part of this tea, traditionally Hong Kong milk tea uses evaporated milk, but I’ve also seen some people use sweetened condensed milk. Luckily, we have vegan versions of it now but it’s typically coconut-based (and often kind of pricey). I find that swapping the milky component for a nice, creamy soy milk or oat milk, or a nice and rich coffee creamer will do just the trick! If I have Silk soy coffee creamer, that’s usually my go-to choice, but if I only have soy milk, I just increase the amount of sugar (from 1 tbsp to 2 tbsp) in the sugar syrup, then use more soy milk. It’s always been a delicious time!

Lastly, it’s important to note that when you cook the boba, it’s not sweetened at all, so if you add the simple syrup separately from the bubbles, they won’t have absorbed any of that sweetness. I’ve found best results by cooking the tapioca pearls for an extra minute or so with the sugar syrup to be the best way to infuse some of the sweetness into the tapioca while also using the remaining simple syrup as a sweetener for the rest of the drink. Trust me, I learned the hard way!

If you don't have soy coffee creamer, use for your favourite non-dairy milk instead! My coffee creamer is sweetened, so when I'm using milk instead, I use 2 tbsp of sugar with the boba to make the syrup instead, then add about 1/2 cup soy milk to 1 cup of tea.