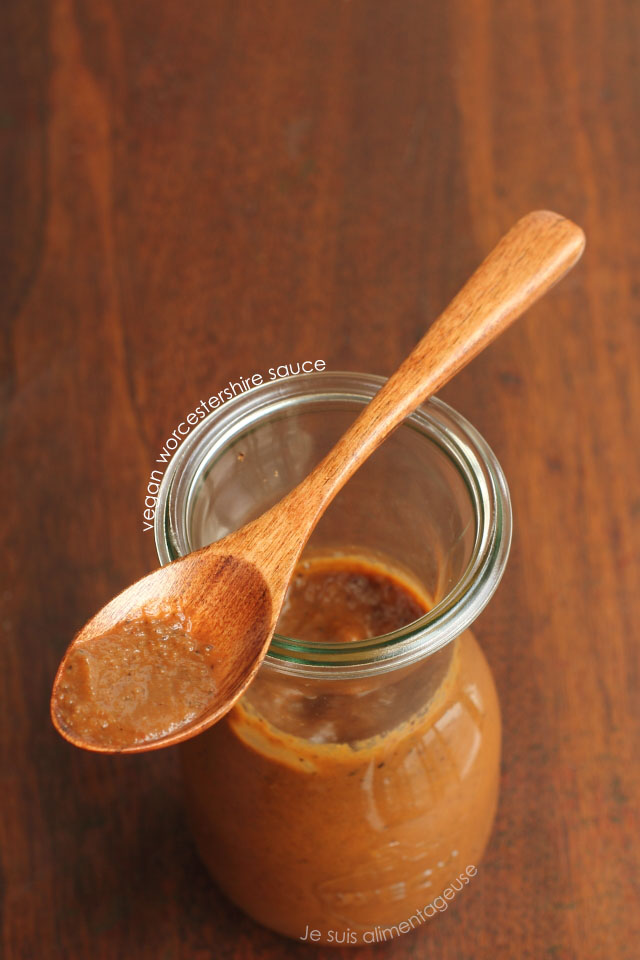 I have a bottle of Lea & Perrins Worcestershire sauce in my cupboard, but it’ll probably go unused because I rarely ever had a reason to use it except for the odd recipe here and there pre-veg days. To top it off, I can’t even use it because of my allergies so it’ll just go to waste. So sad.

I’ve been looking into recipes for a french onion chip dip (dairy-free of course) but so many of the recipes I find require worcestershire sauce. That’s irritating. All I want is a super delicious and vegan way to make a jar of that Ruffles chip dip I used to have all the time during my undergrad.

After a quick Google, I found Martha Stewart’s recipe for Worcestershire sauce. It looked pretty easy, so I was stoked to make my dip. I hurriedly went to the market to get the spices and random ingredients I would need and came home, excited to try this recipe. Chris was here at this time too, and he asked me why it was called Worcestershire sauce. 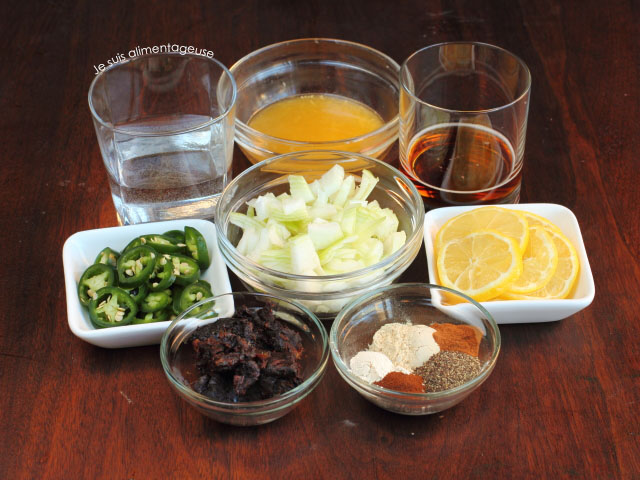 Being the curious cat I am, I looked it up. I found out the backstory (which I’ll divulge in a second), but what I actually found out was that Martha Stewart’s recipe had none of the key ingredients that give worcestershire its rather unique flavour profile. There was no citrus, no cinnamon, no tamarind. This is the upteenth time I’ve been disappointed in Martha.

Luckily I had the ingredients I needed because I’m a special snowflake and I own things like tamarind all the time for Vietnamese food. Buuuut I was still pretty pissed at myself for thinking that Martha knew best.

Anyway, back to the backstory of Worcestershire sauce.

Turns out, what we know as Worcestershire sauce was accidentally created by aging an East Indian hot sauce. You can read the full history according toÂ Lea & Perrins here, but in a TL;DR format:

The governor of Bengal brought some of this hot sauce back to England for his two chemist friends in Worcestershire to try. They thought it was gross and left it in a cellar. A year later, they cleaned out the cellar, found the sauce, gave it another try, and was like “Ooh! Delicious! Now let’s profit!”

On a side note, who the hell thinks, “Oh man, remember that disgusting sauce we had and hid in the cellar? I just found it a whole year later. Let’s try some for kicks!”

That just sounds like a bad idea to me. 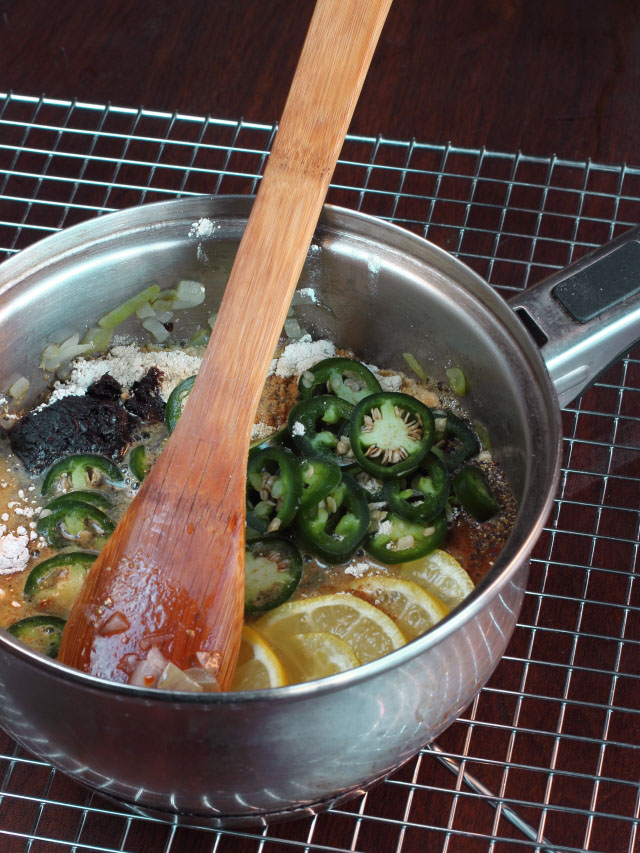 L&P Worcestershire sauce is aged for 3 years and 3 months, but ain’t nobody got time for that. This sauce is thicker with a brighter, robust flavour to it. Dark ale and tamarind add that sweet, deep flavour that is reminiscent of Worcestershire sauce. If you add more salt to stay a little more true to the anchovy flavour, add another 1 tsp salt (I only put in about 1 tsp because I like low-sodium, but for a more authentic salt-level, use 2 tsp). It has a mysterious sweet and serious spice to it, wrapped in the hugs of cinnamon and clove and little kisses of citrus.

The aging process would probably lower the citrus kick to it to be more like L&P W sauce, but my logo has lemons in it for a reason, man. IÂ loveÂ lemons.

Add this to any recipe that calls for Worcestershire sauce, or marinate your proteins in it for some complex flavours and delicious times in your mouth.

I mentioned in myÂ last postÂ that I would talk about the three words I’ve used to rebrand JSA: vegan, feminist, and nerd. Today I’m tackling vegan.

If you’ve been following JSA at all, you’ll know that I’ve been flip flopping between going vegan and staying vegetarian since June.Â But before I go further, let’s get one thing straight:

I’m not here to convert you.

Veganism is not a religion. It’s a lifestyle and an ethical alignment when it comes to food.

My blog has always been my creative outlet for photography and a way to document my life and recipes that I enjoy, and that’s what it will continue to be. However, I will also share what I’ve learned when it comes to food activism, animal rights, sustainability, healthy eating and living, on top of the random anecdotes of my life. 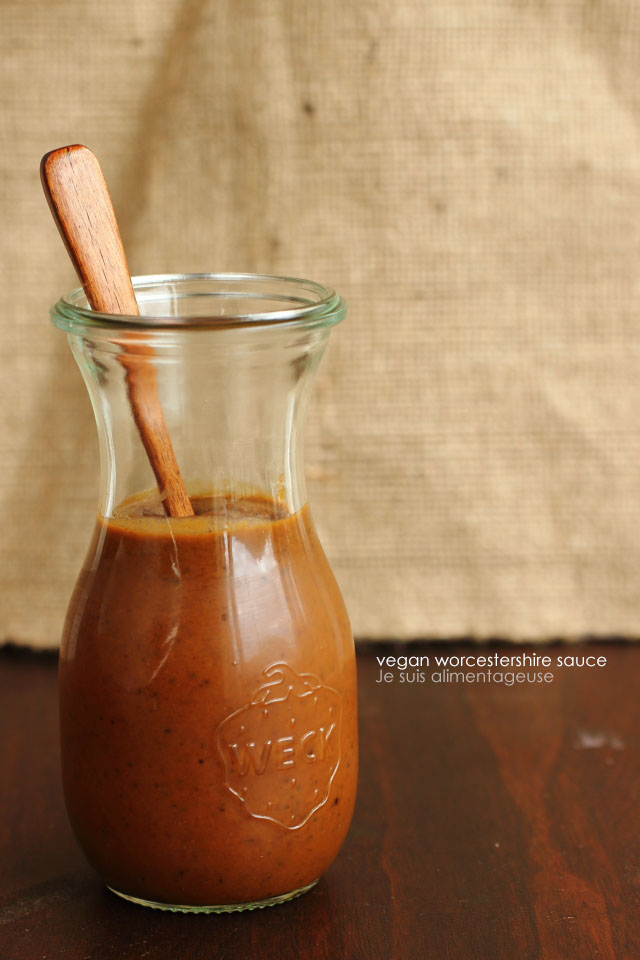 I’m vegan because I no longer want to contribute to the food factory industry, the practices of animal cruelty in the world of cosmetics, clothing, materials, or food products.

I’m also vegan because in December 2011, I found out that I couldn’t eat meat because of my skin sensitivities. I don’t eat meat, eggs, or dairy in the name of health because my family has a history of high blood pressure, heart disease, and a myriad of other things that could affect me down the line.

Ironically when I had my blood pressure tested today, I got 100/67, which is on the lower side of the spectrum. Well damn.

I’m vegan for health and for ethics. It started out being just for health, but after learning about some of the inhumane practices in the food industry, I became uncomfortable with contributing to that economy.

I’m not saying you’re not ethical or healthy because you’re not vegan. But I’m just saying that these are reasons why I’m choosing a vegan lifestyle. I believe that all living things have the right to be treated humanely, not like food while they still breathe.

That’s all I think is important to share about my reasons for being vegan today.

To see what my fellow H&H bloggers have written this week, check them out:

Have a great weekend!

This sauce is thick and saucy, great for adding to savoury dishes. It's a very complex-tasting sauce, it starts with a citrusy sweet flavour that's followed by a salty heat from the jalapeÃ±o and black pepper wrapped in the spiced hug of cinnamon and clove.

*To keep this gluten-free, either use GF dark ale, or just use vegetable broth instead.