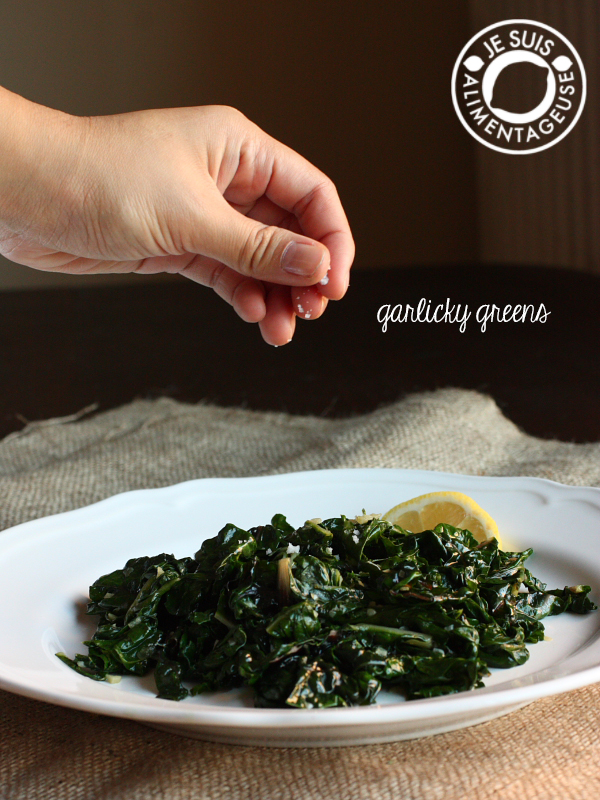 Okay, so Thanksgiving is coming up for my readers down south and I’m sure that many of you are stressing out over how many sides you want or how to time everything and all that jazz. These garlicky greens are easy, really quick, and a great way to get the dark leafy greens into the bellies of your family. Lots of iron, nutrients, and vitamins come in dark, waxy, leafy greens, but so many people hate eating them raw because they have such a distinct taste. But garlicky greens? They are, yes, garlicky, but with a splash of lemon, there’s a lovely little tang that adds a bit of colour to the dark, green mass of health. Yes, healthy is good. But sometimes, healthy is bland. Blah.

That comes with the territory of adopting a healthy, vegan diet. Not the junk food vegan diet, which I admit, I’ve adopted for the past week or so. I’ve been eating veggie “chicken” nuggets, lots of chips and salsa, and english muffins with Daiya cheese melted on top.

On a side note, holy crap, the shredded “mozzarella” Daiya tastes pretty blah at room temperature, but if you melt that stuff down?

MMMM. Stretchy, melty, and cheesy with no indigestion problems for me or you fellow no-dairy or vegan peeps.

Speaking of being vegan, I thought I’d update you on my vegan transition.

So I’ve decided to eat vegan at home, whenever I can when I go out, but in the case that the only thing I can eat has cheese or eggs in it, (or if I splurge at a bakery…), I’m lapsing to vegetarianism.

That probably equates to being 90% vegan.

For you hardcore vegans out there, RELAX. 90% vegan is better than 0%. Or 50%, which I think would account for the typical ovo-lacto vegetarian diet. 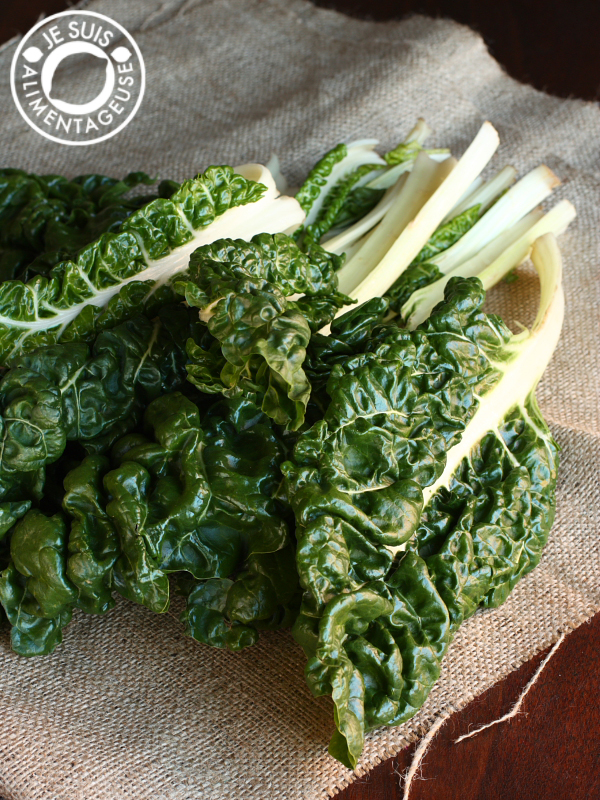 I think that veganism is such a weird social concept, where you get judged from both sides of the diet. You get the average joe omnivores who choose to eat meat, eggs, and dairy. Which is totally fine. If that’s what you want to eat, eat it. It’s not my stomach. I would encourage ethical and sustainable sources of those things, but hey. Not everyone can afford that.

But when many omnivores find out that I’m vegetarian going towards vegan, there’s such an immediate negative stereotype that gets stamped on me.

Okay, so last week I wanted to go buy a pair of veg-friendly black shoes/boots that were sturdy enough for gross Toronto weather and wear but still nice enough to work in. I have leather boots right now from my pre-veg days, and I’m not just going to toss them because that’s a waste, I still like the boots. But I do need new ones eventually. So I went to a bunch of different stores with my friend Janelle, and she is super in love with leather. She was all, oh you should go to this store, and that store, blah blah great quality.

Of all the choices at this store and that store, 95% of the footwear I liked was made out of leather and/or it was $150-200. Towards the end, I saw this pair of Doc Martens that I liked but I wasn’t sure if they were made of leather. I asked the sales rep if they were leather, and she said yes, so I put the shoe back. Janelle didn’t hear the answer, so I said, “Yup. Leather. Can’t do it.”

And I hear from the sales clerk, “Oh. Vegan…”

I shared an “Oh my god did she just say that to me?” look with Janelle and promptly walked out of the store.

I’m not one to cause a scene, but I will write about it passive-aggressively on my blog.

And you’re a bloody sales rep! You’re literally paid to be nice to the customers. I wasn’t rude to you in the store. I asked you a question about a product, and you answered. With judgement. That is pretty much the opposite of good customer service.

I’m never coming to that store again. Ugh. You jerks.

But back to my point: 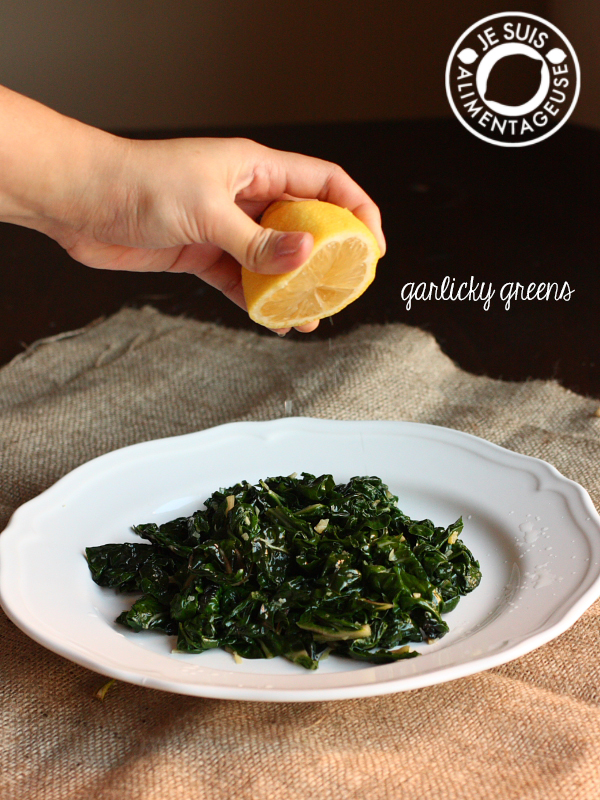 Omnivores judge me. Even some of the people you’d think would be happy with my dietary choices would support me, but that’s not always the case.Â So many people go vegan or vegetarian for different reason: there’s ethical, health, and environmental reasons. If for example, I were to say I’d mostly be going vegan for the health aspect (which is in part true), it doesn’t mean that I don’t also have ethical and environmental reasons to do so, but I’ve prioritized it in a way that doesn’t completely align with many of the people who’ve gone vegan for ethical reasons. In that sense, I get judged for not being “vegan enough” or being wishy washy, blah blah.

Cool it people. We’ve all eating towards the same outcome here.

If all omnivores ate just one meatless meal per week, there’s such a significant environmental impact! That’s a 14% reduction in meat consumption per week. That’s huge! It doesn’t have to be every day, but 14% less meat means 14% less of a need for food factories. I am so into that.

So if you are someone who eats vegan or vegetarian for ethical reasons and are all judgey on the people who don’t. Calm yourselves. People eat what they want to eat. Don’t attack them because they don’t reduce their meat and dairy consumption to 0% like you. That just reinforces the negative stereotype. Even a 14% difference, heck a 5% difference is still a difference.

So for your Thanksgiving, enjoy your food. Enjoy your family. Consider having all your sides be meatless. Or not. Whatever. Go meatless maybe once a week, or once a month. It’s up to you.

But I recommend these garlicky greens as a side. Because they’re awesome. 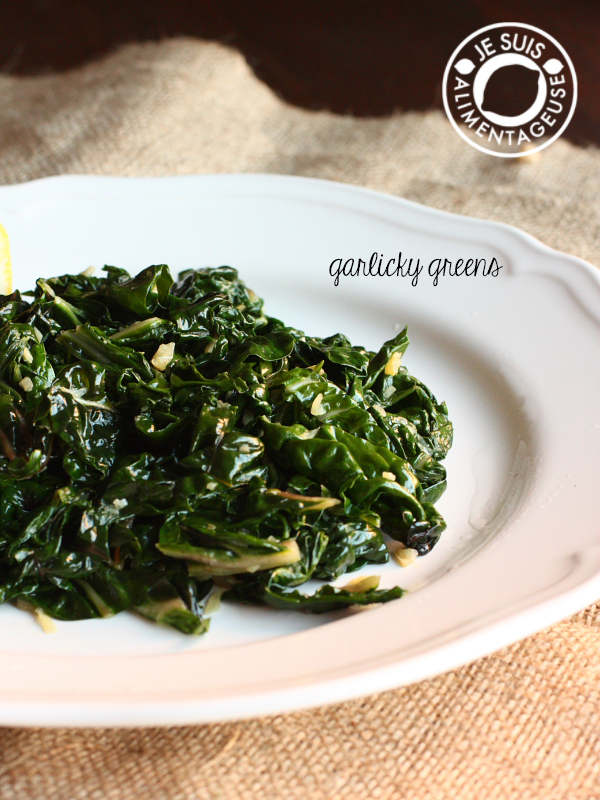