As The Viet Vegan, I feel like homemade vegan Vietnamese pho is an obligatory recipe on here.
So here it is. 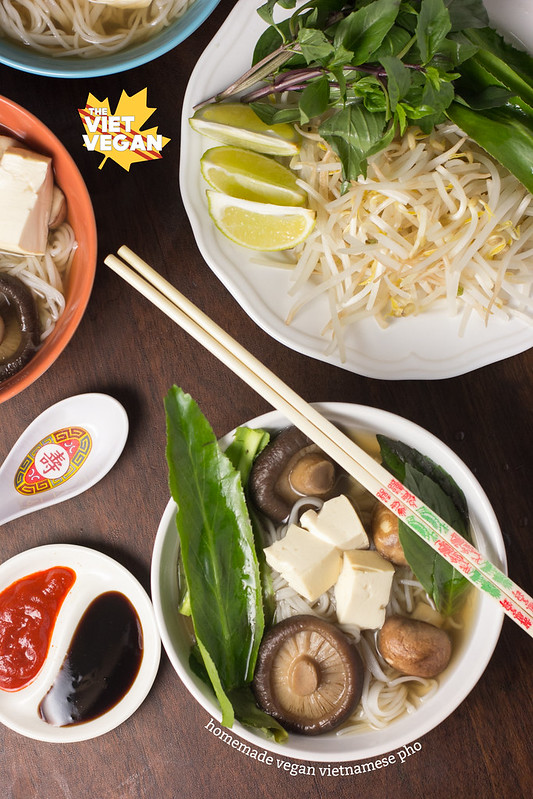 If it weren’t for the fact that I’ve now branded myself as The Viet Vegan, almost nobody would know I was Vietnamese (in real life, anyway). I’ve had people ask me if I was Chinese, Korean, Laotian, heck, one of my friends thought I was Tibetan. I don’t even know what a Tibetan person looks like, although my friend firmly insists that they look like me. My own people don’t even recognize that I’m Vietnamese! In Vietnam, I’m this pale, white whale of an Asian and people will often talk about me in Vietnamese as if I couldn’t understand them. 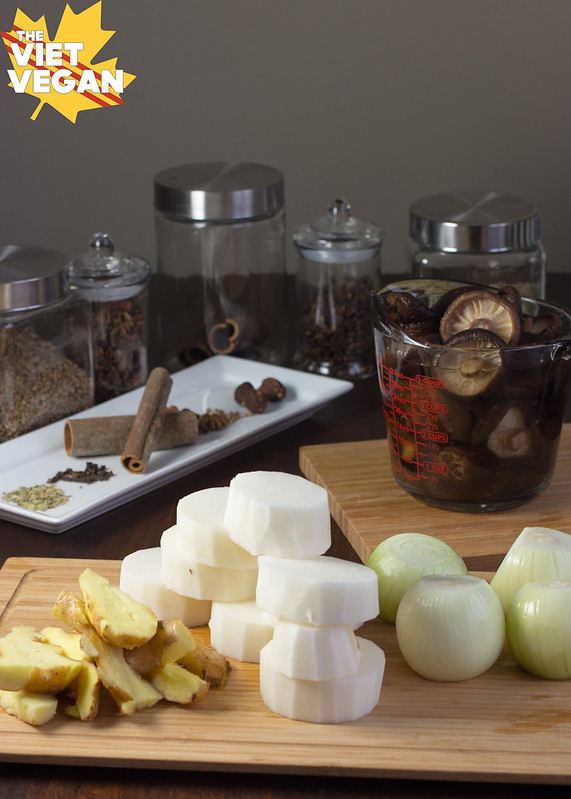 It’s pretty hurtful, but I don’t really know how else I can assert my identity as a Vietnamese Canadian. There are only a few people that I know (to whom I’m not related) who can relate to my upbringing. The loud karaoke long weekends, eating rice porridge when you’re sick…Oh, and awkwardly navigating family functions trying to figure out how you’re related to about 20 people so you can greet them with the proper honorific.

Is she older than my mom? Or younger? Wait how is she related to me… Oh she’s my grandma’s cousin, so now she’s bumped up a level in honorifics. Right?

Then I mumble the greeting and hope that I got it right. 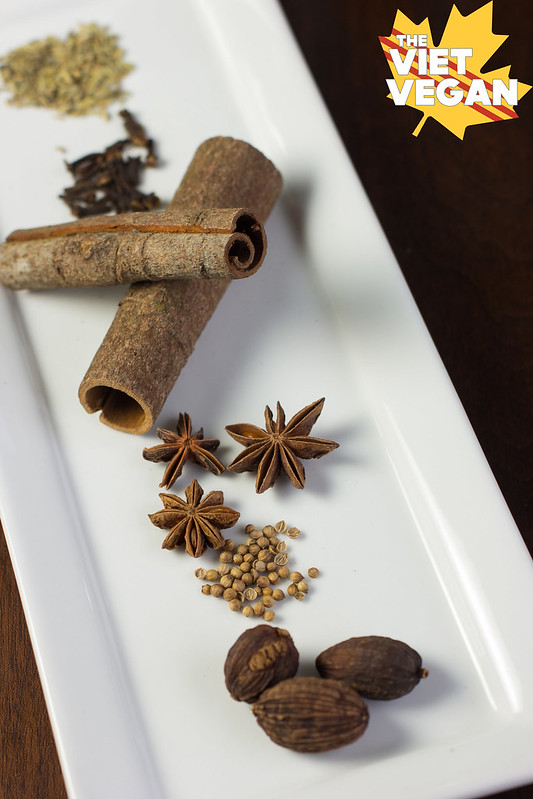 But my fellow Vietnamese-Canadians also know what it’s like to experience a snow day, dousing everything in maple syrup (because DELICIOUS), and chowing down on TimBits while sipping on Tim Horton’s Iced Cappuccinos before it’s recommended to ingest caffeine.

But one thing for sure is that whenever people find out that I’m Vietnamese and that I’m a blogger, they immediately ask me if I like pho and if I’ve made it. Yes I like pho. No I have not made it because it takes forever (traditional beef pho does anyway, this stuff not so much). And then they ask me if they’re pronouncing it right. Usually it goes a little something like this:

People fawn and gush over pho like it’s a magical soup of wonder, which yes, it’s delicious. But in Vietnam, pho is just breakfast food. It’s like oatmeal. It’s delicious, but it’s morning food.

I think the thing people love most about pho is the wonderful collection of spices all simmered into the rich, tasty broth. I tried the soup before I put in the spices, and it tasted…empty. Not quite finished.

But after simmering in the warming spices of cardamom, coriander seed, star anise, cinnamon (specifically Vietnamese Cassia bark), clove, and fennel, it filled out the body of the broth with the liquid comfort that is pho. 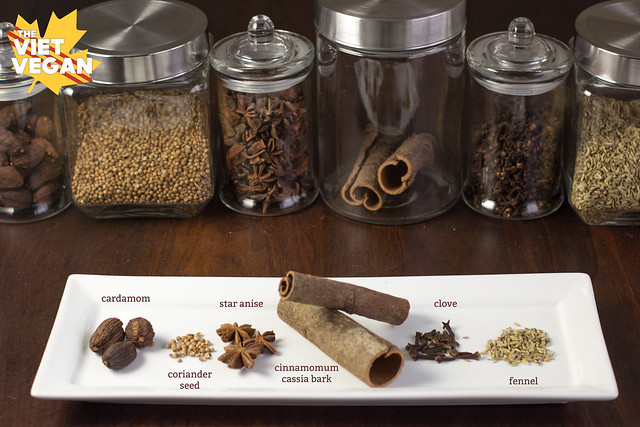 When I was younger, I would visit my grandparents in Vietnam for weeks or months at a time. It was such a culture shock from the spacious land of Canada. My grandparents’ house was a townhouse squeezed between hundreds of other houses on either side of an alleyway. Each house was quite narrow, about the width of my living room (14 feet) but long and at least 4 storeys high.

Early in the mornings before school, I would sleepily meander down 3 flights of stairs to the front gate to see a lady walking through the alleyway selling pho. My grandmother would flag her down and we’d grab 6 bowls from the kitchen. I watched as the lady divided noodles and sliced meat into the bowl, and pour piping hot broth over top. My grandfather came lagging behind for the plate, and the vendor would scoop out greens and sprouts out for us. Little red gems of chilli pepper and a wedge of lime for each bowl sat on the edge of the plate.

After eating breakfast, I’d wash up and get dressed to go to school, fumbling with fountain pens and Vietnamese school customs, but that’s another story for another post. But the pho I had in restaurants in Toronto’s Chinatown never lived up to the street pho from the lady pushing the cart.

Traditionally, it’s made with beef bones, but obviously that will not be the case here. The next best thing is about two dozen dried shiitake mushrooms, soaked, rinsed and drained several times to remove their initial skunkiness, so that when you cook them, all you have is the deep umami mushroom flavour. A low and slow simmer gently coaxes out the flavour of the mushrooms to create a flavourful broth that rivals the beef version.

But the broth isn’t the only thing that makes this soup delicious. Vietnamese people love eating greens. They love a variety of herbs and bean sprouts. I never knew what the herbs were called in English until I found the packages and labels. Thai basil is similar to the basil we are familiar with in Italian cuisine. It has a bit more of a peppery aftertaste and has almost a minty bite to it. Curiander is related to coriander, and has a familiar taste. It’s known in Vietnamese culture to have a positive “cooling” effect on the body, similar to eating basil seeds, cucumber, or chrysanthemum tea. By “cooling” (the direct translation from Vietnamese), I believe it means anti-bloating and anti-inflammatory, but don’t quite me on that because I’m only speculating. 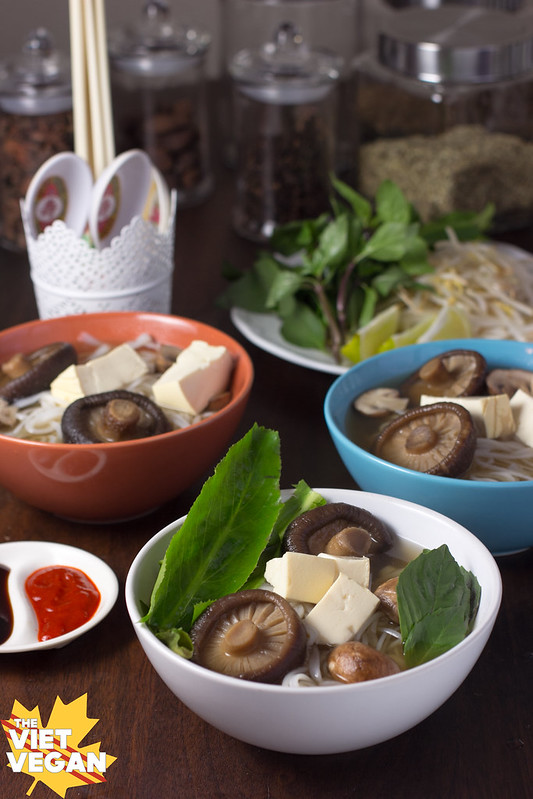 A big thank you to my mom for helping me with this recipe! This is essentially her recipe, just whittled down from “a bunch of this” and “some of that” into this recipe here. Some hoisin sauce and sriracha will bring an authentic flavour to the soup when you serve, a handful of greens, bean sprouts, and a squeeze of lime will transport you to breakfast time in Vietnam.

UPDATE: I retested and revamped this recipe a bit, so I’ve changed the recipe below to reflect those updates. It’s easier now and doesn’t require soaking the mushrooms, and instead uses mushroom broth powder. You can watch the video I made with Rose from Cheap Lazy Vegan to see how I did it if you’re a more visual learner. All in all, it’s your pho, you can do what you need to make it at home. :)